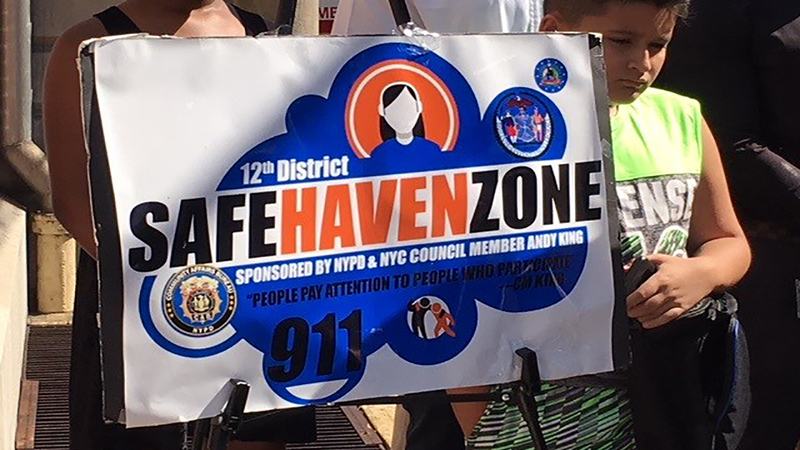 BAYCHESTER, Bronx (WABC) -- A new "Safe Haven Zone" initiative was announced by City Council Member Andy King in the wake of the death of teenager Lesandro Guzman-Feliz, who was dragged from a Belmont bodega and stabbed to death on June 20.

Owners of store front businesses are being encouraged to join the effort to provide a place where anyone can seek help if they fear for their safety.

Paul Brown, watching over his chef at the Ultimate Grill in Baychester, is stepping forward to help watch over his community on East Gun Hill Road.

"I thought about my kids," says Brown. "I think about how we can protect them in the neighborhood. And secondly ourselves as business owners. We want to make sure if we are in the streets and something happens we have a safe haven for ourselves."

Paul and other business owners are joining Council member King to set up what's called a "Safe Haven Zone" where someone in need of help can come to a business with a special sign in the window.

"Store owners and standbyers will be urged to dial 911 in case of emergency. In addition the store will be locked down," said King.

This initiative was sparked by disturbing video of 15-year old Lesandro Guzman-Feliz, known as "Junior", begging for help in a bodega trying to escape a gang of men who were later charged with stabbing him to death.

Business owner Tyro Dillion at Wet Wine and Liquor also felt the strong need to be a part of the "Safe Haven Zone".

These store owners will be given training and, they hope, a faster connection to the nearest precinct. The strong incentive for Dwayne Hamilton, who owns Maleah Monaie, a hair store in Edenwald, is to be able to alert police more quickly to a person in need of help.

"We've been doing this. We are from this community. We've been protecting our own, so it's nothing new to us," said Hamilton.

These owners feel a strong commitment to their community. Paul Brown has even stepped in to help when he has previously seen trouble.

"So if we have a panic button or we call 911 we are going to be preferred. To make sure they serve us immediately," says Brown.

Two state lawmakers have also proposed "Junior's Law" that calls for stores to be safe havens.

The 12 alleged gang members suspected in the teen's killing were in court Wednesday.