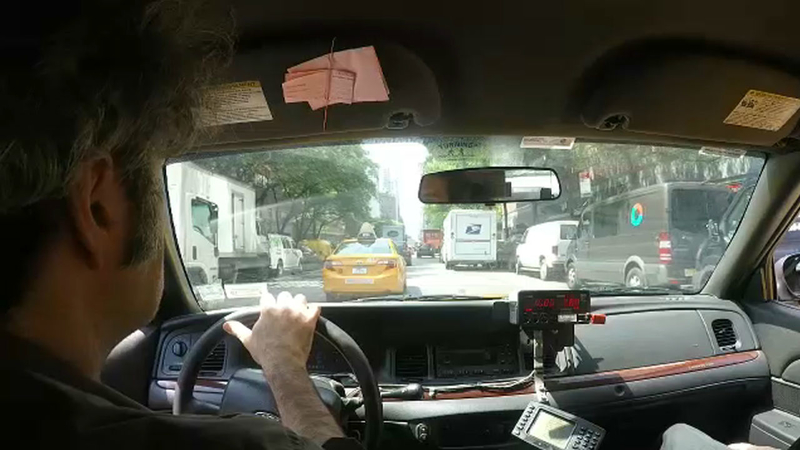 NEW YORK (WABC) -- When an award-winning French filmmaker wanted to research cab drivers in New York City, he decided to get behind the wheel. He spent months driving a yellow cab through the five boroughs, and now he's taking what he learned and putting it in a new book and an upcoming movie.

Take a taxi often enough and you will take it for granted, but "Yellow Cab," by a writer who wasn't brought up in New York City, has forced me to have more compassion for those drivers who navigate our streets every day.

Turns out, you can learn a lot about life behind the wheel of a yellow cab, as Benoit Cohen has discovered. We met by the cab he leased, and he told me, "One time a guy had a fight with his wife and wanted to ask me like, 'What should I do with this or that,' I was like a shrink sometimes."

Cohen was actually an award-winning filmmaker in France looking to write a movie about the city through the eyes of a cab driver. As he puts it, "I want to show that New York is much more than just 5th Avenue and Times Square."

So, he got his license and spent six months behind the wheel.

We joined him for a tour through Midtown Manhattan where he observed, "During the day people are very stressed, and going to work, and you have to be like concentrate. At night it's more chill and people take their time."

But at night, it can get pretty crazy with Cohen telling me tales of the drunk and disorderly, and he also said he "had a couple having sex in my cab."

Some of the best tales are contained in a new book Cohen wrote which he plans to turn into a feature film, but he knows any such movie is bound to be judged against the giant of the genre: "Taxi Driver."

And yet after more than 40 years, surely we're due for an update.

"When you see 'Taxi Driver' now and when you drive a cab now it's the gap between what was New York at that time in the '70s and now," Cohen said.

The city is a lot less dangerous, but not necessarily more forgiving. Cohen admits to feeling lonely and depressed when passengers wouldn't acknowledge him as he drove: "Sometimes I felt like I didn't exist. I'm nobody, and this is like something you should think of when you get into a cab. Just try it."

He suggests trying to exchange a few pleasantries with the driver and tipping him more too, because as Benoit Cohen found out first hand, driving a cab is a tough way to make a living.