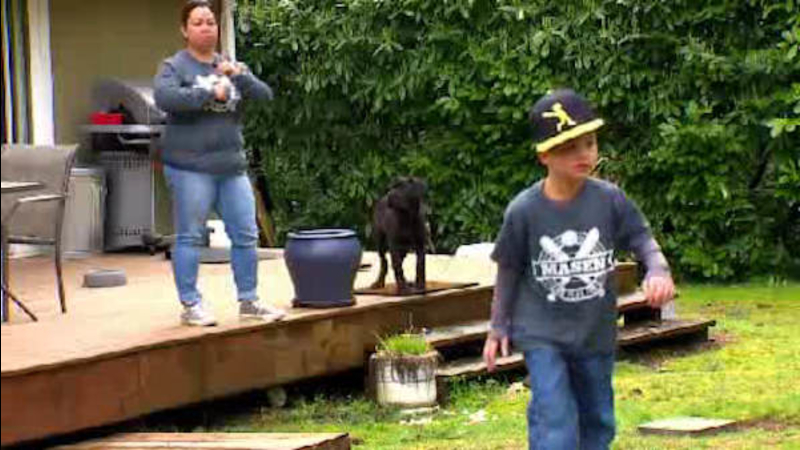 GIG HARBOR, Washington (WABC) -- A community in Washington is rallying to the support of a single mom as her son battles the same type of brain cancer that killed her husband.

Masen Lopes is battling the same type of brain cancer that killed his father, despite doctors saying the disease isn't genetic. His death left the Kainani Lopes to raise 7-year-old Masen and his three siblings all on her own.

Like any doting mom, Kainani Lopes keeps a close eye on her young son. She's also watching kids Rylen, Leland and Azlyn. Kainani is a single mom after her husband Lloyd passed away three years ago.

"He was funny, bubbly, everybody loved him," she said.

Lloyd had brain cancer, with a tumor that grew undetected until he suffered a seizure at home. Masen described taking a bath and hearing a loud boom.

"It was my dad," Masen said. "He slipped and fell. He fell backward and hit his head when he had cancer."

"He had drool on the side of his mouth, his eyes were, they just didn't look normal," Kainani said. "And it was something I'd seen through my husband. My husband, it was hard. But when it's your child? It's harder."

Since Masen's brain cancer diagnosis, he's had four surgeries, two rounds of chemotherapy and two rounds of proton therapy. Before leaving his last proton treatment, he taught the staff how to do his favorite dance, the Whip, Nae Nae. That energetic spirit has the Gig Harbor community rallying around the family, and later this month, they're throwing him an "epic sleepover" so he can play with friends, just like other kids.

"We try and live life without cancer," Kainani said. "Even though it's basically surrounded us, we just try and live how normal people do."

She's been told the cancer isn't genetic, and she doesn't talk about a prognosis.

"I don't believe a person is a statistic," she said. "So I don't ask. And I don't tell them either, although you get the picture. It's brain cancer, no cure."