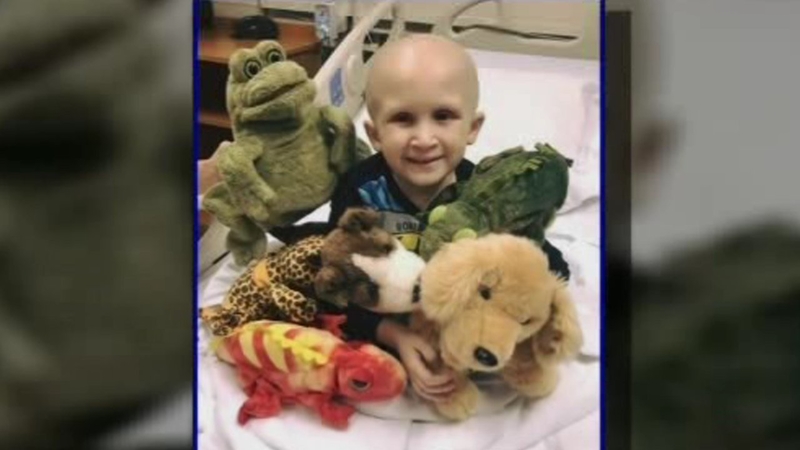 YONKERS, New York (WABC) -- A heartless con artist is using the death of a preschooler to trick people into buying bogus raffle tickets.

The mother of 4-year-old Nolan Scully is speaking out and is furious that someone is using her sorrow to steal money.

You have to be pretty low down and dirty to use pictures of a dying child's last days to scam $25 here and there.

"I'm going to go get my tumor out. I love you all," Nolan said in a video.

"It's bad people that don't know the hell of it that do these things, and if I could show them and tell them the hell, they would think twice," said Ruth Scully, Nolan's mother.

Police say the person who printed up the phony raffle tickets thought nothing of it, using a picture from the Facebook page "Nolan Strong" for a fake fundraising scam. They promised prizes like a 70-inch TV, an iPad, and $200 gift cards.

The top of the ticket said "Nolan Strong, No one fights alone."

"They don't know what it's like to hold your 4-year-old son while he's dying," Ruth said.

Police say the tickets are being circulated in bars at night in Yonkers and also in other parts of Westchester County.

"Right when I figured out that it was indeed a scam, I put something out on Nolan's Facebook page, just because I want no one else to be affected," Ruth said.

The only thing real on the ticket is the venue, the Aisling Irish Center in Yonkers.

Police say someone from the center reported the location was being falsely promoted.

Ruth and her family don't even live in New York.

Eyewitness News spoke to her via FaceTime from her home in southern Maryland.

She says her Facebook journal of Nolan's rare brain cancer, that has nearly 300,000 followers, kept them both going until the day the 4-year-old died. That was on February 4th of this year.