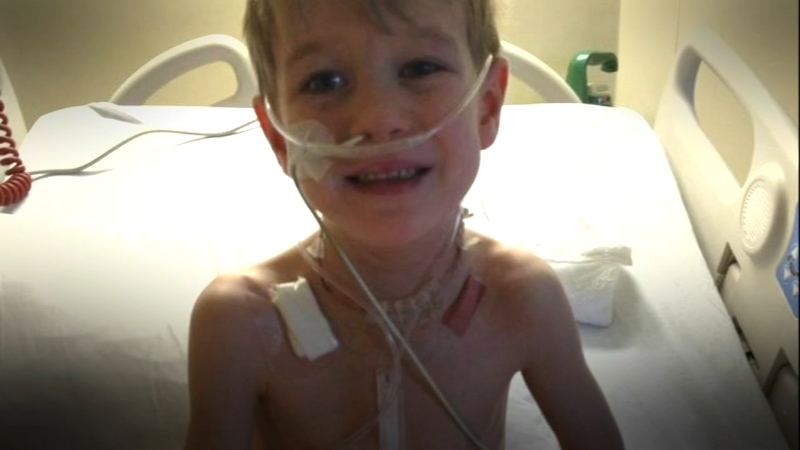 SEATTLE, Washington (WABC) -- The FDA just approved a breakthrough drug that could help thousands of cancer patients every year, and it has already giving hope to a family who thought they were out of options for their 9-year old son.

"When Ashton was 4, I noticed a lump on his neck," mom Kayley Leeds said. "We took him in to see his doctor. Ashton was sent for a biopsy, where they found out that he had stage 4 thyroid cancer."

His diagnosis was dire and devastating to his family.

"Slowly, we noticed his breathing change, and he kind of lost the weight," Kayley Leeds said. "So we went back to see his doctor, and they did another chest X-ray. And it showed that the cancer had spread in his lungs."

He underwent surgeries and treatment, but that didn't stop the disease from progressing.

"The worst moment was probably seeing him after he had surgery, seeing him hooked up to all the machines," dad Shayne Leeds said.

Doctors said there was nothing more they could do.

"They did some testing, and they found out that the cancer had become resistant," Kayley Leeds said. "We didn't know how long Ashton had after that."

That is, until a phone call last spring about a trial for a cutting-edge new cancer drug changed everything.

The medication will be sold as Vitrakvi, or larotrectinib, the generic version. Just approved by the FDA and brought to the market by Bayer, it targets a specific genetic mutation found in certain kinds of cancers. The drug inhibits the protein that's responsible for cancer growth in these tumors.

"Larotrectinib actually specifically targets a change in the DNA of the tumor cells for the specific cancer types," said Dr. Katie Albert, a pediatric oncologist at Seattle Children's Hospital.

Driving 700 miles every month from their home in Alberta, Canada, to Seattle Children's for the treatment, the results for Ashton were stark.

"This is his most recent scan," Dr. Albert said. "Basically, almost everything is totally gone. But as you can see, the difference is night and day."

The drug could provide new hope for thousands like Ashton.

"This medication has been the best thing that has happened to us in the last couple of years," Kayley Leeds said. "It really does give us hope for Ashton's future and that everything is going to be OK."

While Ashton is not completely cured, his response to the treatment has made many feel optimistic.

"When you find a patient that has the mutation that this drug targets, it works almost every time," said Dr. Damon Reed, a pediatric oncologist at Moffitt Cancer Center.

Doctors said this drug will only work for about 1 percent of cancer patients with a certain type of genetic mutation.