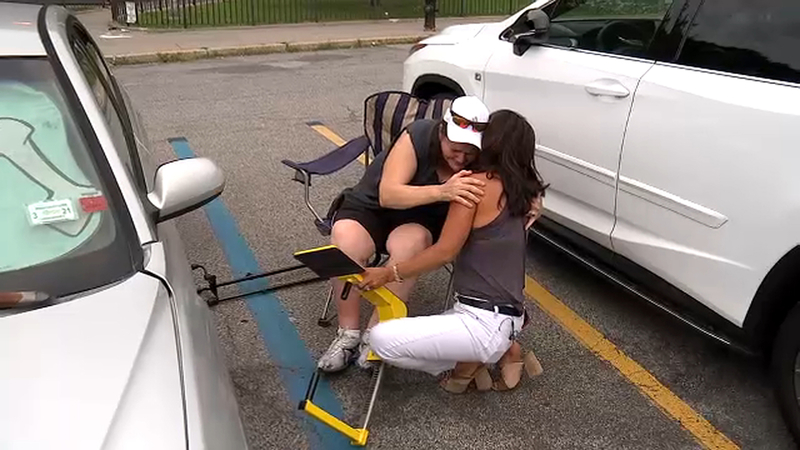 DONGAN HILLS, Staten Island (WABC) -- A woman battling MS got stuck in park after her car was booted for being in a handicapped spot on Staten Island.

But she is handicapped - suffering from a vitamin deficiency, a rare form of MS which causes weakness in her leg and renders her unable to walk or balance without crutches.

The records on both sides show the tenant paid the city for the permit months ago, which allows her to park near her building's entrance.

So she was bewildered by the boot, then even more confused after she says days spent trying to break her car free ended in roadblocks.

"I cry every night, every night I cry over this," said Cindy Kaufman, who says she was stuck and steaming mad after she tried calling everyone to get a boot off her car before calling us.

"I'm losing my mind for seven days, these are my legs," she explained, sitting in the front seat of her vehicle that was immobilized.

Her wheels got locked down at the end of June right in her handicapped parking spot. She first tried to get the NYPD to help.

"The woman was talking to the police officer, she says, 'Is the permit valid?'" Cindy said. "He went around and said it's valid. No tickets, no accidents, no problems driving. So why is there a boot on her car?"

The boot company demanded its $100 fee to remove the heavy lock.

"We are sitting in the parking lot, we're not leaving until this boot's off," said 7 On Your Side's Nina Pineda to the parking company after Cindy showed us the receipt for the permit she paid for last April, valid until 2020. "What we need is someone to come out here and take this off. She's got a doctor's appointment. The woman can't walk. She has MS."

First we tried the New York City Housing Authority, NYCHA, which administers the parking spot, and then we contacted the parking lot enforcer - LAZ Parking.

"I'm calling from Channel 7 News, I have a very big problem," said Nina before the line went dead. "They hung up. Are you kidding me? They hung up."

It was easy to see how the process broke the formerly active airline employee down to tears.

"I had so much to do," Cindy said. "When I stay in the house, I get so depressed about my legs. Now that I can't go nowhere. I'm stuck in the house. I can't go anywhere. I'm so messed up. I don't have another car."

So we put everyone on notice, explaining to both agencies: "She's handicapped. She can't walk. She hasn't been able to move her car, and she has a permit. I can send you photos. She paid her bill. I can send you a receipt."

Within a few hours and simultaneously, both NYCHA and a rep from the boot company called to give us the unlock code -- and 7 On Your Side took the boot off.

"I don't believe this," said Cindy, covering her face as she cried and hugged Nina. "Thank you so much. I've been through hell for seven days. Thank you for this."

NYCHA and LAZ Parking told us they gave us the code "as a courtesy," claiming the car legitimately got the boot because there was no valid permit displayed on the windshield.

And with minutes to spare before our story broadcast, the parking company sent us photos of the front window it claims proves their point.

We have been asking for the photos for the last two weeks. The pictures show the windshield with only expired permits visible on the passenger side, where the permit is supposed to be affixed. But Cindy claims the photo doesn't show the entire windshield and insists her permit was on the driver's side.

Despite the dispute, both agencies forgave the $100 violation fine nonetheless, and Cindy is in her wheels and moving again.

"We followed the parking policies and procedures which were in place. There are specific guidelines regarding the permit which are posted on signage, on the permit application and on the website that were not adhered to by the vehicle operator at the time of the incident in question. These policies are there to protect residents and all parkers utilizing NYCHA parking facilities. We take our responsibility very seriously ensuring that all parkers utilizing the NYCHA facilities rights are protected. In addition, we have extended every courtesy to this parker to assist understanding those rules."