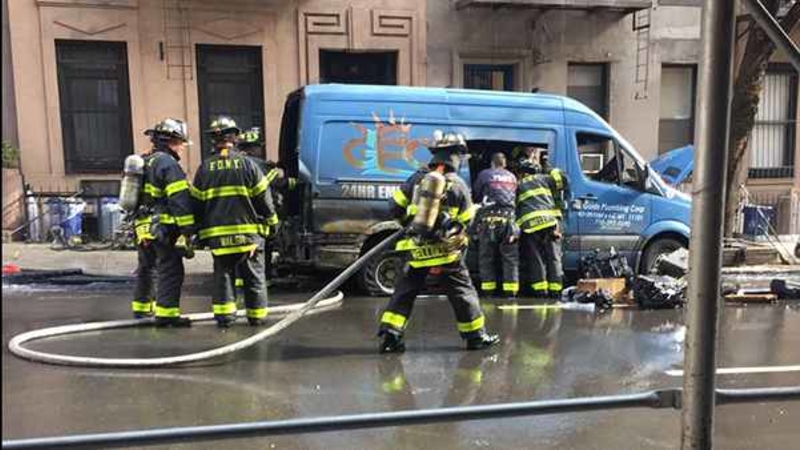 Dramatic video shows line of cars on fire in Midtown

The incident happened around 9 a.m. on East 58th Street between First and Second avenues.

The fire is believed to have started from a Golds Plumbing truck and quickly spread, with the flames extending all the way down the block and eventually damaging eight or nine vehicles.

At least 6 cars burned out along 58th just west of 1st. The fire is out. @ABC7NY pic.twitter.com/WijhXuabNY

The driver of the truck was initially unaware, until he got a phone call.

"There was smoke, and then somebody called my office, and they let me know," Mitchell Duchatelliur said. "And I just got out."

He grabbed a fire extinguisher from a nearby building, but it was too late.

"That's when the gas exploded and went down the block," FDNY Battalion Chief John Corcoran said.

A stream of gasoline ignited, and dramatic video captured the fire spreading from one car to the next.

Incredible video of this truck fire spreading to mutliple other cars. Hear from the driver of the truck at noon @ABC7NY pic.twitter.com/Hn3zRzcTzz

Joe Charasta heard the boom while reading his paper, sitting in his vehicle in the line of cars.

"People kept coming up to me, saying you better move," he said. "And I'm saying why, and they showed me."

He was able to move his car just in time, but other owners who thought they had safe parking for the day weren't as lucky.

"A little bit shaking," he said. "That's the first time that happened."

The fire was placed under control just after 9:30 a.m.
First responders remained on the scene, and 58th Street remained closed between Second and York avenues.

Cars catch fire in Midtown on the East Side.