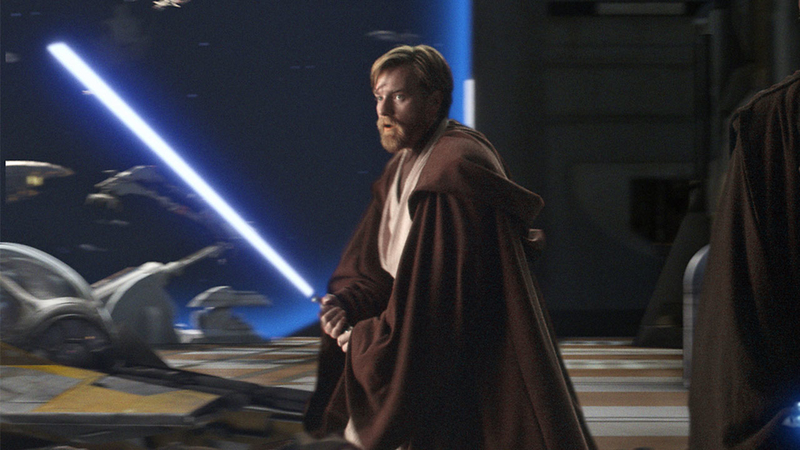 Ewan McGregor to reprise role as Obi-Wan Kenobi for Disney+

ANAHEIM, Calif. -- Ewan McGregor is reprising his "Star Wars" role as Obi-Wan Kenobi in a new series, one of the many splashy projects that Disney is banking on to make its new streaming platform competitive.

The as-yet-untitled Disney Plus show drew big cheers when it was announced Friday at the D23 Expo fan event, as did a "Lizzie McGuire" reboot with original star Hilary Duff playing a grown-up version of the title character.

The audience of about 6,000 at a convention center adjacent to Disneyland also voiced enthusiasm for another "Star Wars"-related series, "The Mandalorian," which its producers said is set in an unexplored time for the space saga and features new characters.

Disney Plus had a receptive crowd, with expo attendees lining up to buy discounted subscriptions before the showcase. But it laid out a two-hour banquet of show trailers and stars to further whet fans' appetite, starting with a performance by cast members of the new "High School Musical" series and appearances by McGregor, Duff, Kristen Bell, Anna Kendrick and others.

"It's been four years of saying, 'I don't know'" when he was asked about the long-discussed Obi-Wan project, McGregor said. "Now I can say, 'Yes, we're going to do it.'"

Among the movies set for the streaming service launching Nov. 12: the holiday comedy "Noelle," starring Kendrick, Bill Hader and Billy Eichner, and a live-action remake of 1955's animated film "Lady and the Tramp," with Tessa Thompson and Justin Theroux voicing the canine couple. Yvette Nicole Brown, who hosted the Disney Plus showcase, also stars.

Disney is reaching into its library for the streaming service with classic projects and updates on them, like "Lady and the Tramp." But it's also relying on brands that were acquired by Disney, including Marvel, Pixar, Fox's entertainment businesses, and "Star Wars" home Lucasfilm, making it a formidable newcomer.

Here's what you can expect to see when the Disney+ streaming service launches on Nov. 12.

"Ms. Marvel," ''Moon Knight" and "She-Hulk," derived from Marvel comics, are being developed as live-action series for Disney Plus, Marvel Studios President Kevin Feige announced. Also coming is "What If...?" an animated series that imagines alternate Marvel universe realities, such as Peggy Carter as Captain America.

"Monsters At Work" is a series inspired by the Pixar movie "Monsters, Inc." with a new cast of monsters and starring Ben Feldman and Aisha Tyler in its voice cast.

Among the other programs for Disney Plus, which is launching with a $7 monthly price tag (pricing to vary outside the United States):

- "Diary of a Female President," a comedy series about a Cuban-American girl's middle-school experience and her path to becoming the U.S. president. Tess Romero plays Elena, with Gina Rodriguez producing and guest-starring as the adult version.

- "The World According to Jeff Goldblum," a National Geographic series in which the actor explores such things as sneakers, ice cream and synchronized swimming.

- "Encore!" from executive producer Bell, which gives former castmates of high school musicals the chance to perform together again and revisit their teenage insecurities.

- "Forky Asks a Question," with Tony Hale reprising his role from "Toy Story 4" in new Pixar animated shorts about the inquisitive toy.