Catering manager steps up to perform wedding ceremony in Ohio 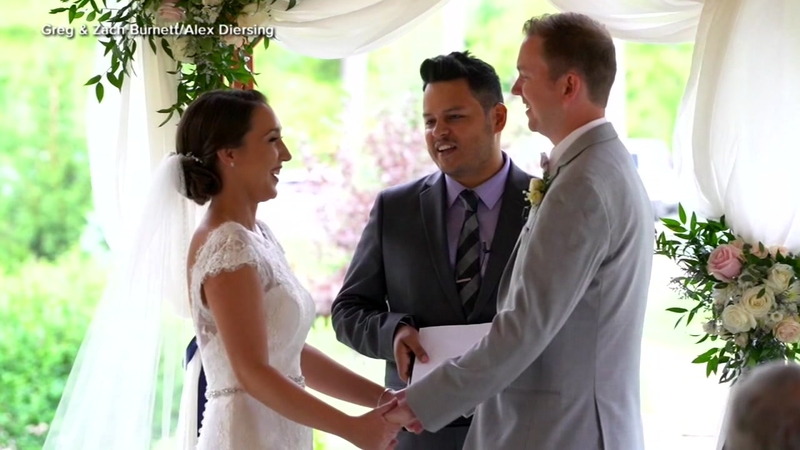 Caterer steps up to save the wedding day

CAMDEN, Ohio -- He was supposed to deliver the food for a wedding in Ohio. Instead, the caterer ended up delivering a winning role -- actually marrying the bride and groom.

On the night before their wedding, during the rehearsal for the outdoor ceremony, the officiant hired by Kelsey and Andy Schneck slipped and broke her ankle.

"I was pretty much in a state of panic," Kelsey said. "I've been planning my wedding for an entire year and we're not going to be able to do it because we have no one who can legally perform weddings."

At that moment, the caterer pulled up, bringing food from City Barbecue. Kelsey asked the driver if he could hold on for a moment because it looked like the officiant was going to have to go to the hospital.

That's when catering manager Manny Morales told her that he could marry her, saying, "I'm an officiant."

"I thought he was kidding," Kelsey said.

But Morales said he could do it and that he was free the following day. It turns out, he really wasn't, because he was an events coordinator for the popular barbecue chain. But when he explained the situation to his bosses, they let him have the day off.

And so, Kelsey and Andy were married by Manny. Luckily, the original officiant, who had to have surgery on her broken ankle, had written everything down. The night before the wedding, Manny practiced in front of the mirror.

"I made a joke at the beginning, and then I just read what she wrote," he said.

This was actually Manny's third wedding. He went online last year and filled out an application to become a wedding officiant because a dear friend was getting married. But for this wedding, the bride could not be more grateful and says Manny is now practically a member of the family.

"I mean, he saved our big day," she said. "I mean, I would describe him as almost the hero of the wedding, because without him, I don't know what the outcome would've been. He saved our day in every way possible."