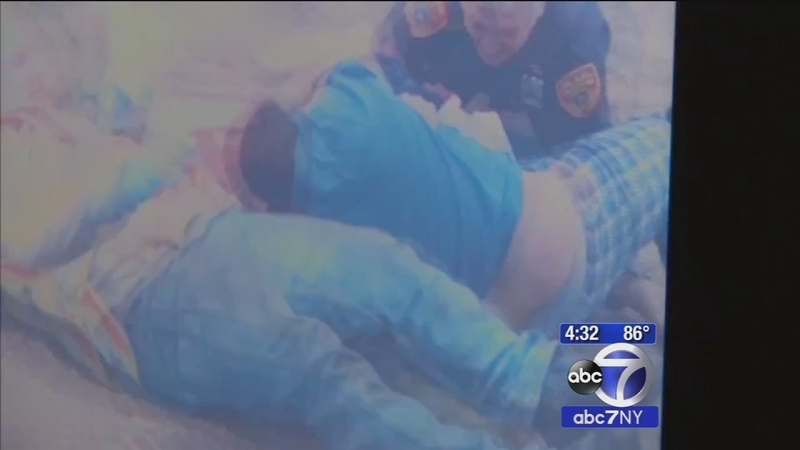 CENTER MORICHES (WABC) -- A cell phone recording by a Long Island man resulted in his phone being taken away.

He captured a violent takedown by Suffolk County police, and as a result, he says he was pulled over and police took his phone and kept it for several weeks.

Thomas Demint was arrested a year ago for obstruction of justice and resisting arrest.

He says he was on his way to work in Center Moriches when he saw police arresting one of his friends. So he pulled out his cell phone and started recording.

" I wasn't there to expose anybody or to make anybody look bad. I was there because these cops were really being violent with them," Demint said.

Demint says the last time the officer told him to leave he put his phone in his pocket and walked away.

"Three police officers jumped him on the back, threw him down to the floor and cuffed him. They arrested him and charged him with obstruction of justice," said Demint's attorney Ken Mollins.

Demint says while he was on the ground an officer, "came over and took my phone out of my pocket and went to the last video in my phone and deleted it but when I had gotten tacked to the ground my phone took two accidental videos of me just muffled on the ground. So he deleted the wrong video."

Demint says two weeks later he was pulled over for rolling through a stop sign.

"Immediately the focus was on having my phone," he said. "They asked me about my phone and after they had got the phone the police officer said, now I have the video and you'll be seeing more of me and you can count on that."

Demint says police had his phone for 6 weeks.

"I called twice a week for every week trying to get my phone back and they were like they either told me the detective wasn't in for me to talk to or I would have to call back at a later time," he said.

Once he gets the charges dismissed he plans to sue Suffolk County Police for false arrest and violation of civil rights.

"Suffolk County Police officers responded to a Center Moriches home after a 911 caller reported an adult male was attempting suicide on May 21, 2014 at approximately 11:10 a.m. When police arrived, officers attempted to administer aid to the suicidal man when his family intervened. While police were attempting to calm down those involved, Thomas Demint interfered with officers by shouting obscenities toward police officers and paramedics as well as entering the scene several times after he was told not to. Mr. Demint's actions diverted officers' attention away from the suicidal man and Mr. Demint had to be physically escorted away from the scene. Mr. Demint was placed under arrest for Obstructing Governmental Administration and Resisting Arrest.

The Suffolk County Police Department respects the civil rights of all members of the public. These rights extend to bystanders at police scenes; however, bystanders must not interfere with police operations or create a safety risk to the public. Bystanders may record video as long as they do not enter restricted areas, interfere with police operations, violate any laws or compromise the safety of officers."