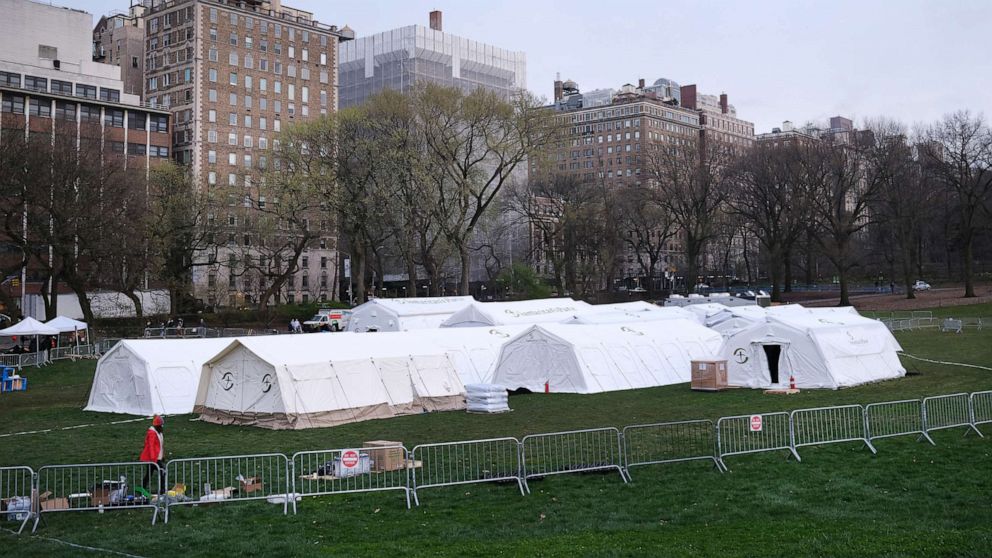 A 68-bed makeshift hospital is expected to open in Central Park on Tuesday in an effort to ease some of the strain on the city's hospitals that have been bombarded with COVID-19 patients.

The field hospital in New York City is comprised of 14 tents and will receive patients first from Mount Sinai Brooklyn and Mount Sinai Queens. Brooklyn and Queens have been the hardest-hit boroughs in the city's outbreak, according to data released by the city.

Doctors, nurses and other medical personnel will be on site, according to the evangelical Christian organization Samaritan's Purse, which helped construct the makeshift hospital.

Volunteers from local churches also helped to build the field hospital, according to the group.

"People are dying from the coronavirus, hospitals are out of beds and the medical staff are overwhelmed," Franklin Graham, president of Samaritan's Purse, said in a statement. "We are deploying our Emergency Field Hospital to New York to help carry this burden."

Construction at the site began on Sunday.

"We're going to be using every place we need to use to help people ... so this is the kind of thing that you will see now as this crisis develops and deepens. The partnership with Central Park Conservancy, our Parks Department and the mayor's office -- we all worked together to get this done with Mount Sinai and Samaritan's Purse," de Blasio told reporters Sunday.

Samaritan's Purse also offered help in Italy as hospitals there are overwhelmed with patients.

Twenty-four hours after a field hospital opened in the Italian city of Cremona, the intensive care unit was full, according to the organization.

Once a bed frees up, a new patient is immediately brought in.

The Central Park field hospital will not be a walk-in center but rather take patients that are already at a Mount Sinai hospital.

There are more than 66,000 cases of COVID-19 in New York, the most of any state in the country, according to Gov. Andrew Cuomo.

Other temporary medical sites have also been approved to ease the burden of local hospitals. There is at least one temporary hospital in each of the five New York City boroughs.

What to know about Coronavirus: