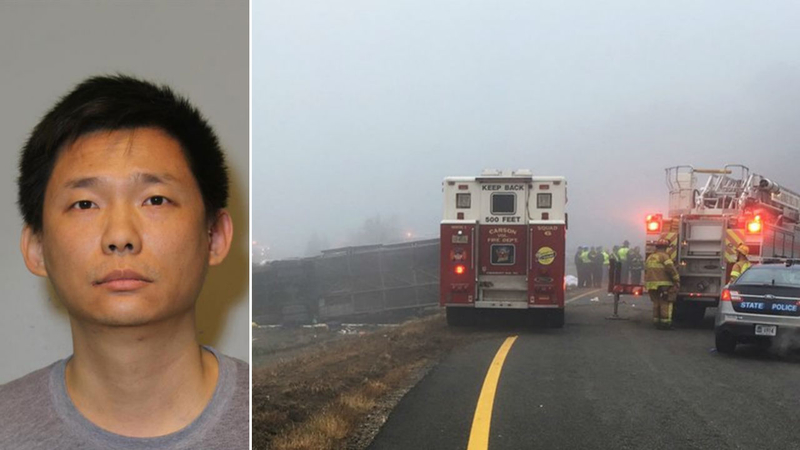 KINGWOOD, Virginia (WABC) -- Two people were killed when a charter bus traveling from Florida to New York overturned on an Interstate 95 exit in Virginia Tuesday morning.

Virginia State Police say in a statement that the Tao's Travel Inc. bus with 57 people aboard flipped over in Prince George County just before 5:30 a.m.

Authorities say that as the bus turned onto an exit, it ran off the left side of the ramp and overturned.

Images from the crash scene show crews working around the overturned bus in foggy conditions.

Investigation continues into cause of Tao's Travel bus crash in @PrinceGeorgeVa Tuesday AM on I-95 that claimed 2 lives & injured dozens. Charges pending. Bus was traveling from #Orlando #FLA to #NYC. @FMCSA on scene w/#VSP Motor Carrier Safety Team. pic.twitter.com/pT2Yg6EtGO

Police say one person died at the scene, while the second died at a nearby hospital.

The victims were only identified as an adult male and an adult female.

Everyone aboard the bus was taken to a hospital, whether for serious injuries or as a precaution.

The driver, a 40-year-old man from Staten Island, was taken into custody.

A representative of the Department of Transportation's Federal Motor Carrier Safety Administration is on scene and the National Transportation Safety Board has been notified, police said.

Online FMCSA records show that the Middleton, Massachusetts-based company with four vehicles and eight drivers logged 900,000 miles last year. Records show no crashes reported in the past two years but list five violations in that period, including speeding and defective or no emergency exit windows.