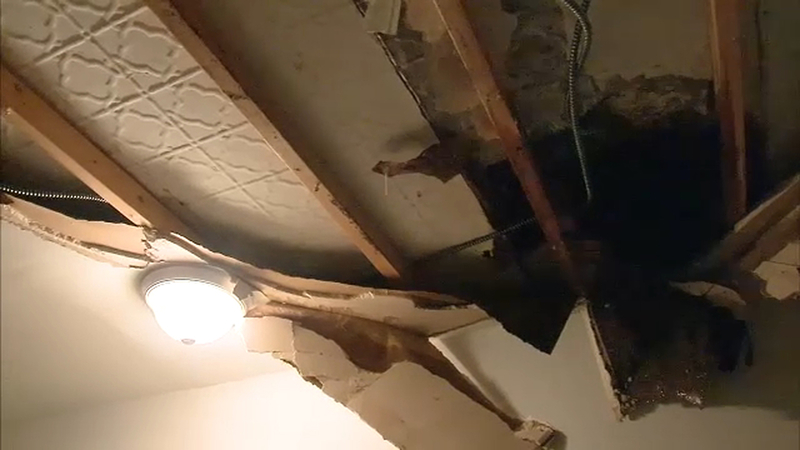 CHELSEA, Manhattan (WABC) -- It is a soggy mess inside a Manhattan apartment building following a partial roof collapse.

And residents are concerned about rain worsening the problem.

They say the issue started when work on the roof was suddenly stopped, leaving a gaping hole improperly covered. And when the rain came, a number of apartments were damaged.

The ceiling caved in, and debris was scattered all over in the bedroom on the fifth floor of one apartment.

"We're getting out in case there's another collapse," said resident Taylor Calligar.

It's been weeks of anguish for residents living in the building on West 16th Street in Chelsea. The city placed a stop work order on the roof project.

Tarps were hung over the compromised portions, but recent rain was too heavy and water gushed through the top floor.

"We had water bubbles and brown water coming out of the walls," said Calligar.

Tenants say it's not just the top floor that's damaged. The water is seeping through the floors below and when they called the building management, they were far from satisfied.

"Lazy, there hasn't been a response, until I threatened to call the state," said Calligar. "And then they waited some more and we still haven't gotten a response."

When Channel 7 called they responded, and quickly, with this statement: "We have already begun repairs to resolve the ceiling issues that were created by the recent rains when the city issued a partial stop work order over a permitting discrepancy related to disposal of construction debris. This has caused a delay in the roof repair."

They further apologized, but is that enough for the tenants?

"It's upsetting because I liked living here until the roof came down," said Calligar.