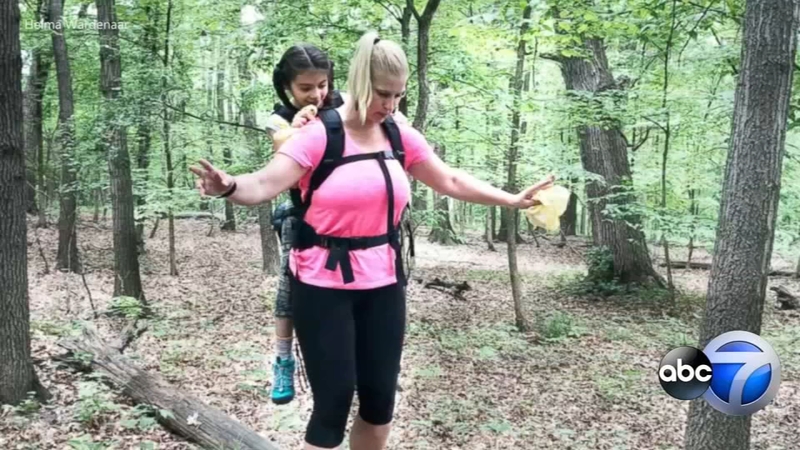 CHICAGO -- For Helma Wardenaar, it was never an option for one of her students to miss the annual class camping trip - even if it meant carrying her on her own back.

Wardenaar is a special ed teacher and director of student services at the Academy for Global Citizenship on Chicago's Southwest Side. She's worked with Maggie, who has cerebral palsy, since she was in kindergarten.

Since Maggie needs a walker or wheelchair to get around, the two-day trip - especially a hike in the woods where students look for signs of wildlife - didn't seem possible.

"As a school, it was very important to include her," Wardenaar said. "We thought it was super important for her to be there and able to do everything the other students were doing."

So Wardenaar looked into the options - even considering borrowing a friend's pony - to make sure Maggie could come. Unfortunately, she was told by the forest preserve that ponies were not allowed.

"I would have choked the fine if we were caught, but I figured that it would set a bad example for the students," she said.

She eventually got in touch with Greg Coleman, who works at a REI store in Chicago. They looked at all sorts of travel backpacks, carriers and slings, but none were built for a 62-pound child to sit in.

With only a few weeks before the trip, Wardenaar continued searching for a solution, even testing out a wheelbarrow in the school's garden. Unfortunately, it was another dead end since it was too unstable.

It was then that she heard from Coleman, two weeks after their meeting.

"He wrote, 'I couldn't let go of that idea. I really want to help you out,'" Wardenaar said.

It turned out Coleman had found a new product called the Freeloader, a backpack-style child carrier. With no room in the school budget for such an item, she purchased the $300 carrier herself.

Thanks to her perseverance, Maggie was able to join her classmates on the hike searching for deer prints, beaver dams and identifying birds.

"When she noticed I was huffing and puffing, she even gave me a little massage on my neck," Wardenaar said. "Then she started singing as a distraction."

Wardenaar credited Maggie as her inspiration to keep searching until they found a solution.

"Maggie's just such a wonderful student," she said. "She's bright, positive, determined. With her smile and her enthusiasm, she inspires. You want to go above and beyond."