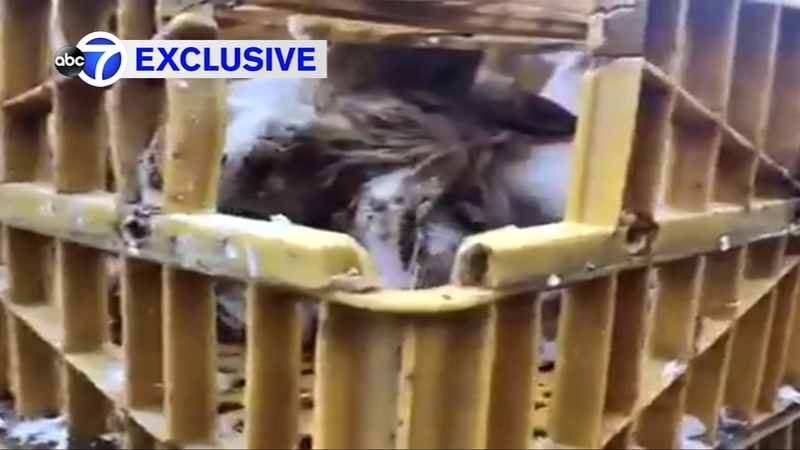 WILLIAMSBURG, Brooklyn (WABC) -- Exclusive video shows scores of chickens found dead in cages in Brooklyn, as part of an Orthodox Jewish ritual that courts have, so far, protected.

The heat likely got to them. The chickens were going to be killed anyway as part of "Kaporos."

"These chickens could've easily been left there for hours and hours, and to die from heat exhaustion, is an excruciatingly drawn out way to die," said Jill Carnegie with the Alliance to End Chickens as Kaporos.

See raw video shot by activists of a chicken ritual in Williamsburg.

Certain ultra-Orthodox Jewish groups have been performing the ritual for more than 2,000 years in which a live chicken is swung three times over one's head to atone for sins, during the days leading up to the Jewish holiday of Yom Kippur -- the day of atonement.

"We had a meeting in our community with the rabbis," Assemblyman Dov Hikund said. "All are on the same page. It's gotta be done the right way, can't cause situations where chickens are not being fed."

Yet many rabbis and other Jews have objected to the ritual just as much as the animal rights groups who have been fighting Kaporos with chickens in the state courts.

When we arrived with our cameras Tuesday and asked to talk about Kaporos, we were told "no."

"They're kept in crates for days without food and water, which not only violates 15 state laws but it also violates Jewish law," chicken "Kaporos" opponent Rita Deych said.

A spokesperson from New York City Hall issued a statement, saying, "The City will enforce public health and safety laws if violated."