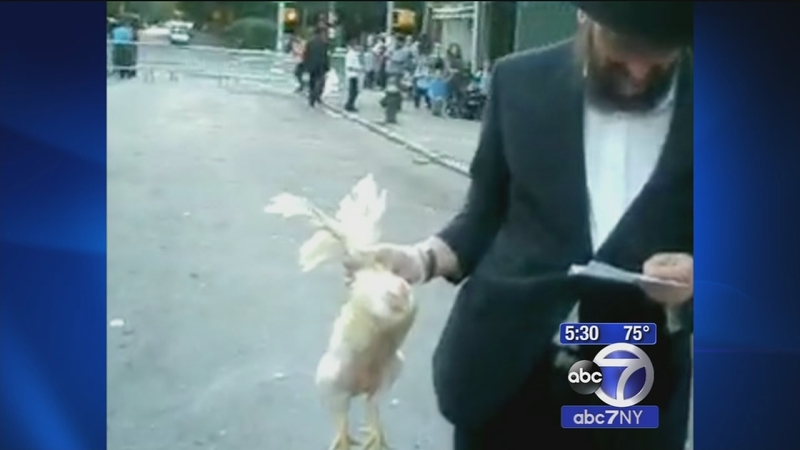 BOROUGH PARK (WABC) -- A New York judge on Monday denied an injunction filed to stop an annual religious ritual practiced by Hasidic Jews that involves the public slaughter of chickens.

The group of Brooklyn residents behind the movement to stop the practice claimed animal abuse over the systematic and bloody slaughter in the streets.

The annual ritual is known as "Kaporos," and it is when many ultra-orthodox Jews seek to absolve themselves of sin by killing chickens.

But critics say what was once a discrete, private religious ceremony has become a grotesque public spectacle.

An estimated 50,000 chickens are slaughtered every year, many of them on public streets in Williamsburg, Crown Heights and Borough Park.

"People are visibly upset by it, the stench is overpowering, right in front of women and children and the general public the slaughterer cuts the neck of the bird," Borough Park resident Rina Deych said.

Deych, who is Jewish, is one of dozens of residents who filed a lawsuit to stop the annual ritual. It is conducted in September, in the days between Rosh Hashanah and Yom Kippur.

Lisa Ranz says the ritual is entirely unregulated by any city agency.

"And they say it does not require a permit because it's a religious event and that is incorrect," Ranz said.

But supporters of the ritual insist the claims are exaggerated, and in the ruling, the judge took their side.

"I have never seen what they describe, but is there a situation where someone does it the wrong way, just like any other practice that people don't do it the right way, that of course is unacceptable, but I have no idea what these people are talking about," Assemblyman Dov Hikind said.