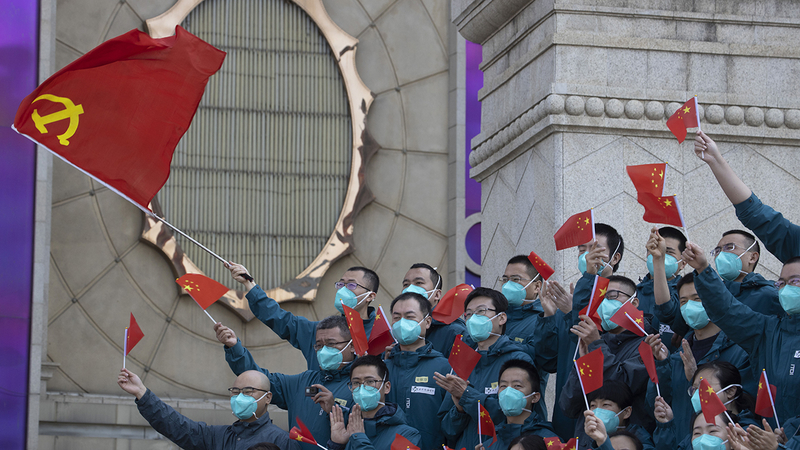 ABC News has obtained a U.S. intelligence report that suggests China hid the extent of the coronavirus epidemic from the rest of the world as it hoarded crucial medical supplies.

The Department of Homeland Security report said the country "intentionally concealed the severity of COVID-19" in early January.

During that time, officials said China was also building out its own stockpile of medical supplies and took steps to protect it.

The virus was first identified outside of the Chinese city of Wuhan in December 2019, and by mid-January, and the surrounding Hubai providence became the epicenter of the coronavirus outbreak.

At that time, China reported to the World Health organization that the virus showed "no clear evidence of human-to-human transmission," according to a Jan. 14 WHO tweet.

Preliminary investigations conducted by the Chinese authorities have found no clear evidence of human-to-human transmission of the novel #coronavirus (2019-nCoV) identified in #Wuhan, #China🇨🇳. pic.twitter.com/Fnl5P877VG

But according to the intelligence report, exports from China dropped significantly as the country cornered off supplies, disrupting the global supply chain for nations that needed those essential items most.

"We further assess the Chinese government attempted to hide its actions by denying there were export restrictions and obfuscating and delaying provision of its trade data ... trade data shows that China likely stockpiled medical supplies for domestic use before its official notification to the World Health Organization that COVID-19 was contagious," the report said.

A Homeland Security analysis shows China produces about 80% of the world's surgical face masks but 48% fewer were shipped out during that time period. Exports on gloves dropped 48% and ventilator exports dropped 45%.

This report comes as the rift between the U.S. and China deepens. President Donald Trump once praised China's handling of the outbreak, saying President Xi Jinping was "doing a very good job with a very, very tough situation."

Now, the president is stepping up on attacks, placing blame for the virus on China.

"We are not happy with China. We are not happy with that whole situation because we believe it could have been stopped at the source, it could have been stopped quickly, and it wouldn't have spread all over the world," he said last week.
Report a correction or typo
TOP STORIES
State of Emergency issued in NY to help boost hospital capacity
Broadway legend Stephen Sondheim dies at 91
Man fatally stabbed in lobby of Brooklyn apartment building
Second NYPD officer shot by suspect released from hospital
New omicron variant stokes world fears, triggers travel bans
Stocks fall sharply on new COVID variant; Dow has worst day of year
AccuWeather: Freezing winds and potential flurries
Show More
Massive fire causes home to collapse in New Jersey
Black Friday shoppers take advantage of deals across Tri-State
Family's beloved dog stolen from Long Island home
Photos released in fatal stabbing of 36 year old near Penn Station
Deodorant recalled due to cancer-causing chemical
More TOP STORIES News