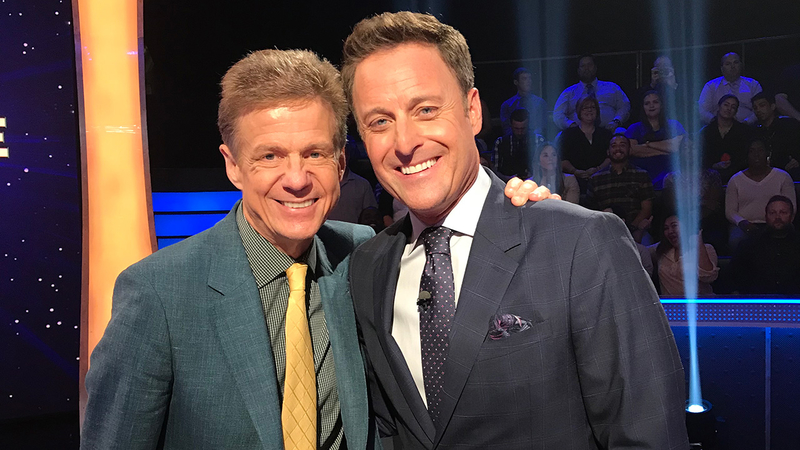 LAS VEGAS, Nevada (WABC) -- No game show gives away more money than "Who Wants To Be a Millionaire," and that's just one thing I learned when I spent a day on the set in Las Vegas watching host Chris Harrison make it look easy.

As we walked towards the center stage podiums, he said proudly, "This is like Yankee Stadium. This is it."

To stand where the contestants stand is to feel the heat, and one thing you instantly notice is that the audience is really, really close. To show how close, Harrison measured the distance between the podium and the bleachers.

That amps up the excitement for executive producer James Rowley, who is located in a truck just steps away across the vast soundstage in a parking lot next to a casino.

"We have great, high energy audiences in Vegas," he said. "We get a much wider contestant pool, because eventually everyone comes to Vegas."

That includes visitors like Eileen Lanzarone, who grew-up in Park Slope.

She credits Harrison with calming her down.

"(It) felt a little bit like I was just talking to him," she said.

Lanzarone said it's much harder to play when people are looking at you, and members of the audience have the fate of some contestants -- literally in the palm of their hands.

Harrison showed me a device at each seat in the bleachers and explained one of the show's lifelines.

"When you're here and you're part of the audience, if they need help, ask the audience," he said. "So obviously, it's a multiple choice question, and they fire in. So you can make or break a contestant."

Each contestant gets just one shot at a million dollars, but Harrison will tape seven shows this day and greet more than a dozen players.

"There's a moment in the game when you hit that life-changing money," he said. "And you see it washing over them, and the tears start welling up, and you realize in all of this craziness you've just changed someone's life."

This season, "Who Wants to be a Millionaire" will pass a milestone when more than $100 million will have been given away on the syndicated version of this long-running show.

Jennifer Matarese interviews Chris Harrison, host of 'Who Wants to Be a Millionaire.'