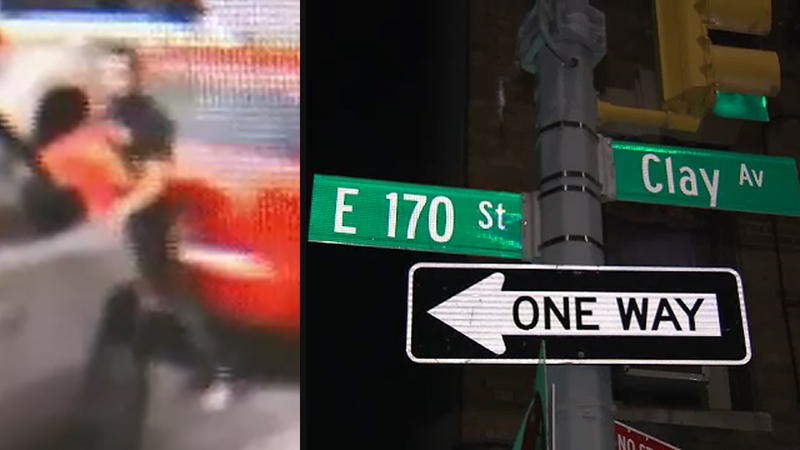 CLAREMONT, Bronx (WABC) -- A Bronx father is fighting for his life after he was struck by a hit-and-run driver, and police are hoping surveillance video will lead to an arrest.

Christopher Andino, 32, and another man were walking across Clay Avenue near East 170th Street in Claremont late Sunday afternoon when he was hit by a dark-colored sedan and sent flying into the windshield and over the front of the car.

The father of two small children suffered massive head trauma, and the driver fled the scene.

"Stopped for a second when he hit him and keeps going," witness Louis Negron said. "Instead of crossing and looking to the sides, he was talking on the phone. When he turned, boom. I heard the noise, that's it. And I seen the guy on the floor."

Negron was just coming out of his apartment and stumbled onto the tragic scene.

Andino was rushed to St. Barnabas Hospital, where he is in critical condition.

Friends say his family is at his side.

"He was the best person on the block," friend Neosha Scheu said. "He was the only person who made you laugh all day long. You could hang out with him. He was the best father to his daughter and the best husband to his wife."

Scheu said she can't believe the driver did not stop and is pleading for them to come forward.

"It should be no reason in that people are speeding like that in the middle of the road and take somebody with them," she said.

Area residents say the street has its traffic issues, and normally a police officer is on patrol at the entrance to Claremont Park.

"They come up speeding up the hill and they run through the light, and he chase them," area resident Louie Rivera said. "They'd be on the phone. That day there was nobody there."

In the meantime, friends are praying for Andino's recovery.

"I'm praying for him," Scheu said. "That's all we can do is just pray for him. He's a strong man. He's going to pull out from that. He's a strong guy."