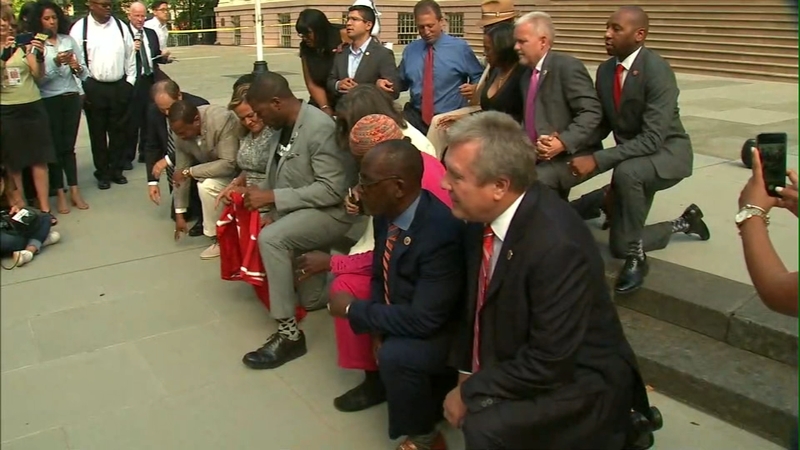 NEW YORK (WABC) -- Sixteen New York City council members gathered in front of the steps of City Hall and "took a knee" as a show of solidarity with the NFL, players, coaches and owners Wednesday.

Over the weekend, President Trump said players should be fired for kneeling during the playing of our national anthem. At noon, City Council member Jumaane Williams (D-Brooklyn) said, "Protesting is probably the most American thing that one can do. Everything we enjoy in this country is because of protesting."

In 2016, Colin Kaepernick, who used to play for the San Francisco 49ers, began the silent protest of kneeling on the sidelines during the national anthem because of what he called the oppression of people of color in the United States -- particularly the police shootings of many young, African-American men in the last few years.

Friday night at a political rally in Alabama, President Trump said "Get that son of a b---- off the field." That prompted a show of protest from many NFL players over the weekend and Monday night. They say it is a player's constitutional right to protest and speak out against racism. Trump has said this has nothing to do with race -- it's simply important to show patriotism during the national anthem.

City Council member Brad Lander (D-Brooklyn) said, "We're here in solidarity with people who are just merely expressing their free-speech rights in the cause of racial justice."