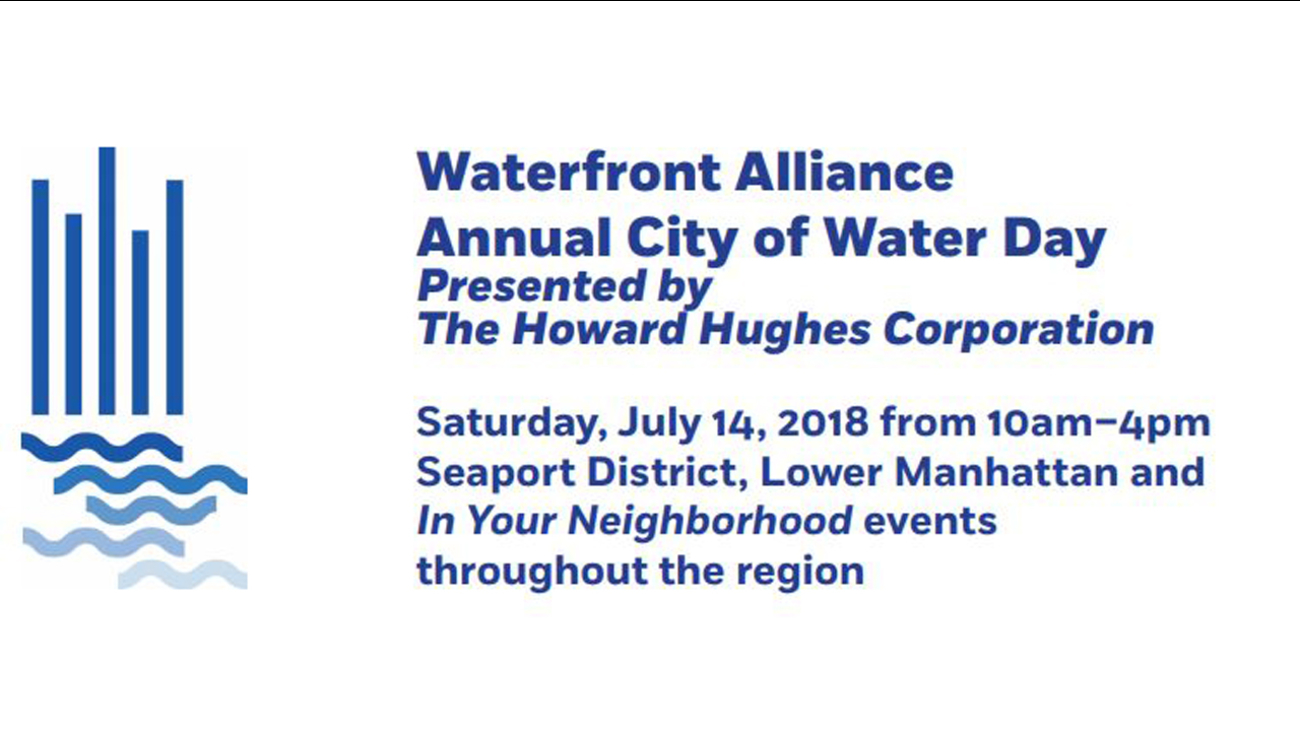 NEW YORK -- It's the region's largest and most popular harbor festival: City of Water Day - getting people to, on and in the water this July!

This year's events are scheduled for Saturday, July 14, 2018. Read about it in this release from its organizers, the Waterfront Alliance,

The 2018 festival hub-presented by The Howard Hughes Corporation-will come alive at the piers and cobblestones of the historic Seaport District in Lower Manhattan, while dozens of community groups and organizations will host their own City of Water Day In Your Neighborhood events in all five boroughs, Yonkers, and New Jersey. Popular activities returning to the City of Water Day festival hub this year include the Con Edison Cardboard Kayak Race, Disney children's activities, and the Waterfront Activity Fair, where Waterfront Alliance partners will offer waterfront education activities, giveaways, and more. Live music and food vendors offering some of the best bites in the region will round out the day.

New to City of Water Day in 2018 are the free, narrated PortNYC boat tours sponsored by the New York City Economic Development Corporation (NYCEDC) and taking place along the South Street Seaport Museum Street of Ships. Hosted by local vessel operators, the PortNYC boat tours honor New York City's maritime heritage and the
historic "Street of Ships"-two miles of East River waterfront once lined with sailing and cargo ships-and remind festival-goers of the vital maritime services that continue to enrich our lives today. The South Street Seaport Museum, a City of Water Day 2018 festival partner and the cultural anchor of the South Street Seaport Historic District, will offer $5 museum admission, as well as hands-on educational activities along Pier 16.

FIND OUT MUCH MORE ABOUT THIS YEAR'S ACTIVITIES!

Also debuting this year at City of Water Day are activities in celebration of the Erie Canal's bicentennial-a series of programs and events organized by the Waterfront Alliance with a grant from the New York State Council on the Arts. The success of the City of Water Day In Your Neighborhood satellite sites reflects the grassroots movement to fully
unlock access to waterfronts around the metropolitan region. Each year on City of Water Day, communities come together to paddle kayaks, cast fishing lines, explore wetlands, and simply appreciate and learn more about their waterfronts and waterways. The In Your Neighborhood program highlights the great need to create more access for
more neighborhoods to enjoy their waterfronts, and, importantly, ties waterfront fun to stewardship and advocacy.

"We are pleased to have the Seaport District play such an integral part in City of Water Day and look forward to seeing our waterfronts come to life in celebration of this special Waterfront Alliance event," said Saul Scherl, president of the New York Tri-State Region, The Howard Hughes Corporation. "The Seaport Museum is thrilled to partner with Waterfront Alliance on City of Water Day; this water-focused event brings attention to New York's origins as a port city and focuses efforts on the future of our metropolis," said Jonathan Boulware, president and CEO of the South Street Seaport Museum.

"New York has long been and continues to be one of the greatest maritime cities in the world," said Matthew Kwatinetz, EVP, PortNYC and New York City Economic Development Corporation. "The City of Water Day festival will be celebrated in the heart of our port assets in the Upper Hudson Bay and East River. Our signature programs and initiatives, including NYCruise, DockNYC, maritime shipping hubs such as the recently announced South Brooklyn Marine Terminal and the Global Container Terminal on Staten Island, and the City's wildly popular NYC Ferry system, are meeting the needs of New Yorkers and helping strengthen the city's economy. We're proud to support this exciting day on the water throughout the city."

"The Con Edison Cardboard Kayak Race is an opportunity for participants to innovate and have fun as they build their boats and paddle them in the Harbor," said David Gmach, director of New York City Regional and Community Affairs. "It also helps focus attention on the wonderful work the Alliance does in advocating for our waterfront, one of
New York City's greatest environmental, recreational and economic resources."

"Every day should be City of Water Day!" said Roland Lewis, president and CEO of the Waterfront Alliance. "More than half of waterfront districts in New York City, however, have only one or, worse, no places for people to touch the water. As we head to the city's edges on July 14 to enjoy the water, let us remember there's still much to do to ensure safe, accessible, healthy, and resilient waterfronts for all."

City of Water Day is generously sponsored by (in formation):
Presenting Sponsor: The Howard Hughes Corporation