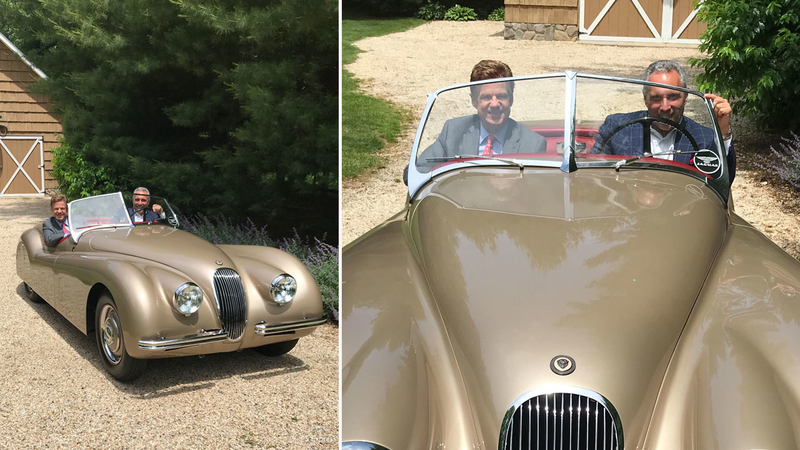 The late Clark Gable and I share one love in common: we're both 'car guys' who happened to get into show business. So a chance to ride in the star's old Jaguar seemed like a great opportunity!

It's a sports car fit for a king - in this case, The King of Hollywood.

In 1952, that would've been Clark Gable, who ordered a Jaguar XK120 before leaving to make "Mogambo" in Africa. Upon his return, his roadster was ready.
"It's absolutely beautiful. It's one of a kind, like he was," says the car's current owner, Joe Limongelli.

It's unlike any other Jag because The King had it customized. I noted the modifications were very subtle.

"Yes," Joe agreed, sliding his hand along the car's right front fender. "There were directional markers on top of the fender, but George Barris removed them, shaved them off, and made this smooth design."

Similarly, he moved the license plate below the bumper on the rear of the car to improve the flow of the lines.

Barris was the same guy who built the famous Batmobile for the "Batman" TV show a dozen years later.

He gave this car a special paint job and custom luggage to make it even more distinctive.

Clark Gable was a big man: 6'2". And the Jaguar's cockpit looks small. He must have had some trouble fitting in there.

"It's a tight fit" the owner agreed!
Limongelli keeps the car at his home on Long Island, having bought the Jag after a lengthy restoration.

"It was in a barn for close to 35 years," he told me. It was brought back to life by a previous owner so the big cat could purr again.

It is now as lustrous as the day it was made, as sensuous as any of the leading ladies Gable romanced back in the day.

Limongelli has come to this conclusion: "It's just an honor to own something like this. And then knowing that he was driving it before me, and now I have the pleasure of owning it, and I'll be a caretaker for a short time. But it's wonderful to know I'm a piece of that history."