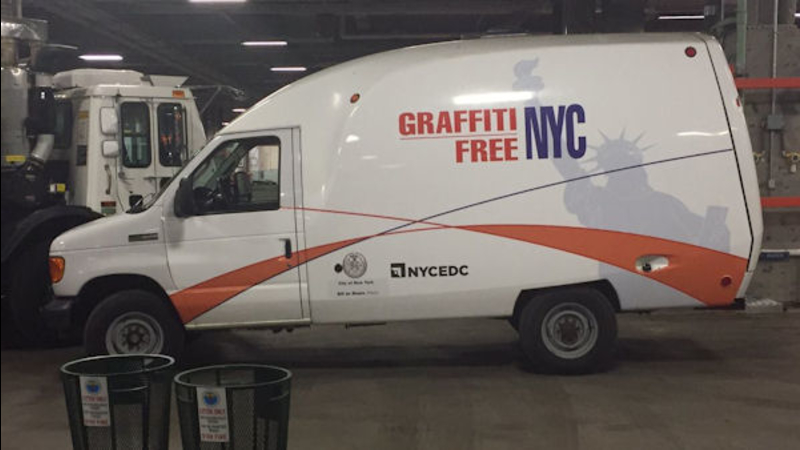 The effort will include stepped up Graffiti-Free NYC efforts, sidewalk power washing in commercial corridors, the expansion of Sunday and holiday litter basket collection service, and high shoulder/ramp cleanup.

Graffiti-Free NYC will remove graffiti from private and public structures, power wash sidewalks and remove stains from street furniture. The new Graffiti-Free NYC trucks will be equipped with power inverters, allowing the equipment to run without using the engines or gas-powered generators.

"With this expanded Graffiti-Free NYC program, we're making a major investment in quality of life for people in all five boroughs," she said. "We're also ensuring that our commercial corridors are places where businesses can thrive and create new jobs. And importantly, through partnerships with local workforce development organizations, we're creating employment opportunities for New Yorkers who need them the most."

The Department of Sanitation will expand litter basket collection by 40 percent, focusing on heavily trafficked neighborhoods across the five boroughs, ensuring service on days when pedestrian traffic is often at its highest.

"There will be 20 additional basket trucks on Sundays and holidays going forward, which is nearly a 40-percent increase," sanitation commissioner Katherine Garcia said. "And those trucks will predominantly be in the Bronx, Brooklyn and Queens.

With expanded resources, the Department of Sanitation will also be able to sweep approximately 100 additional miles per week of highway shoulders and ramps, removing litter, dirt, leaves, millings and other debris.