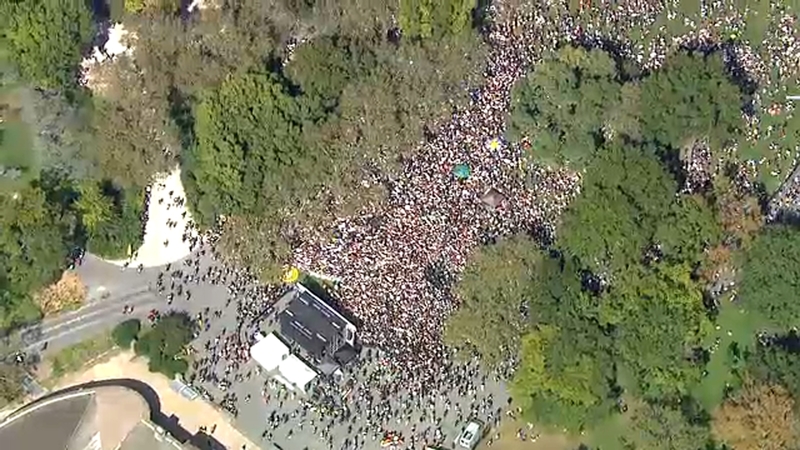 NEW YORK (WABC) -- Millions of people around the world are taking to the streets for the Global Climate Strike, demanding that leaders tackle climate change in the run-up to a U.N. summit.

In New York City, thousands of students walked out of class, gathered in Foley Square and marched to Battery Park, where they'll hear from speakers about the concerns over climate change.

As many as 1.1 million New York City school kids were eligible for an excused absence to participate in the strike.

This comes just ahead of the U.N General Assembly session in New York City, which starts Monday.

WATCH: Tens of thousands turn out for NYC Climate Strike


The protests are partly inspired by the activism of Swedish teenager Greta Thunberg, who has staged weekly demonstrations under the heading "Fridays for Future" over the past year, calling on world leaders to step up their efforts against climate change. Thunberg is expected to speak at the U.N. Climate Action Summit on Monday.

Events kicked off in Australia, where an estimated 300,000 protesters marched in 110 towns and cities, including Sydney and the national capital, Canberra

Organizers say more than 800 events are expected across the United States.

Mayor Bill de Blasio and his wife are joining thousands of students with Greta Thunberg at the protest. Thunberg arrived in the city last month by an emissions-free yacht in New York Harbor, which she sailed across the Atlantic.