LIRR train collides with truck near crossing in Bethpage 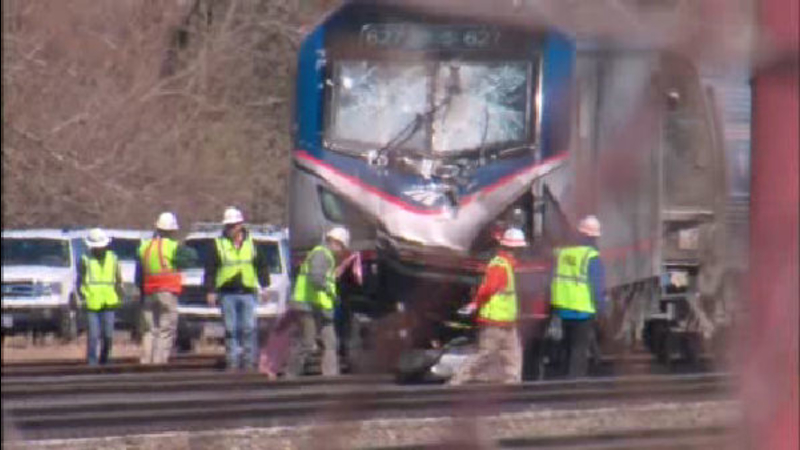 RONKONKOMA, Long Island (WABC) -- Authorities are investigating a collision Tuesday evening between an LIRR train and a truck in Bethpage.

Investigators say that the truck was trying to back into the CVS Pharmacy parking lot.

Passengers on the LIRR train say it was actually sitting on top of the tracks when the train approached, but at the last second the truck driver backed up just enough to avoid what could have been a much more serious collision.

"We just felt the train just pop us back you know because he hit the brakes," said Sean Henderson, a passenger.

Passengers on a Ronkonkoma LIRR train Tuesday evening say it was a close call.

Sean Henderson was sitting by the window that that tractor trailer bumped into and took some pictures.

That truck nearly smashed into the westbound train around 5:30 p.m.

Investigators say the truck driver got stuck in traffic as he was trying back into the CVS parking lot.

Eyewitnesses say the crossing gates had already come down, when the driver tried to back out, but panicked and jumped out of the truck before fully clearing it off the tracks.

"He jumped out, well wouldn't you jump out? (He backed it up?) He tried to back it up as far as he could do it wouldn't collide with the train," Henderson said.

It happened at the Broadway crossing in Bethpage, with about a hundred passengers on the train.

Police say the crossing gates worked properly, but they came down between the truck's cab and trailer and with cars in front and behind him the driver had nowhere to go.

Henderson says the train clipped the truck by about an inch.

"It's crazy, yeah, it's a major safety hazard," Henderson said.

The accident caused about 90 minute delay.

The good news is no one was injured. The MTA Police are investigating.