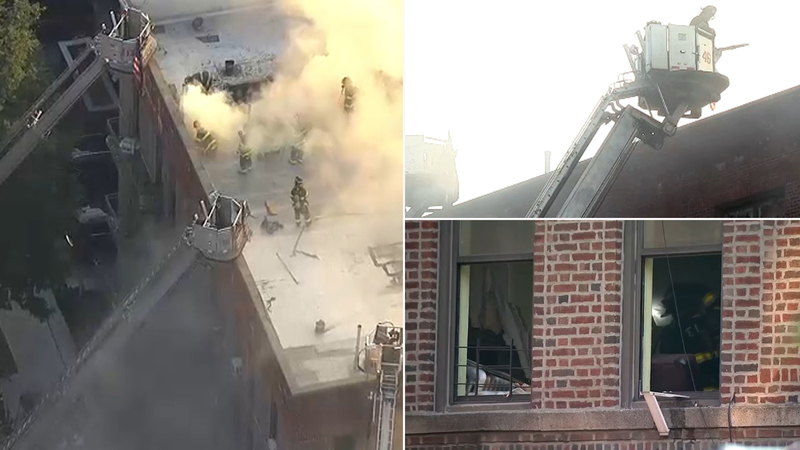 CONCOURSE VILLAGE, Bronx (WABC) -- Fire officials said five firefighters and a baby were injured in a fast-moving, multi-alarm fire in the Concourse Village section of the Bronx.

The blaze broke out at 5:30 a.m. in the 200 block of McClellan Street and soon went to multiple alarms.

"I just looked outside my window," said resident Natalie Allen. "That's the kitchen right there, and I saw smoke coming out and then the alarms started coming out."

A sixth alarm was struck shortly before 7:30 a.m and a seventh just after 8 a.m.

Video from NewsCopter 7 showed multiple firefighters, including several on the roof, working to control the blaze.

Chief of Fire Operations Thomas Richardson said the fire appears to have started in a grocery store on first floor and soon spread to all floors above.

A void in the walls of the building contributed to the quick spread of the blaze and has complicated efforts to contain it, Richardson said.

Residents began evacuating into the streets. Holding onto loved ones, they could only hope some of their possessions could be saved.

"This is all I have left on me," said Allen, gesturing to herself and what she was wearing. "I didn't take my phone. I didn't take nothing. I just took my dog and my son and my husband. That's it."

Jose Mercado said he saw the smoke early in the morning.

"I just went door to door to wake up people, it was crazy, thank God I saved my family and my dog," he said.

Fifty-five units and 250 firefighting personnel were hard at work on the scene by the time the situation was declared under control.

As they were still trying to get the upper hand, fire officials launched a drone that provided critical video.

"That can actually help us develop our strategy and tactics on how we are going to cut off the fire," said Richardson. "And that drone did come in handy today."

Five firefighters and a 9-month-old infant were treated for injuries.

One of those firefighters was taken away on a stretcher, having fallen down a flight of stairs.

In addition, images from the scene showed a cat which had apparently made its way onto a fire escape. The animal did not survive.

Very sad to report the woman just learned her cat has died. https://t.co/j1XNKXaaGj

Many residents are now being helped by the American Red Cross, which is providing food and shelter.

The blaze was the second multi-alarm fire reported in the Bronx in as many hours early Monday.

Three people were hurt in an earlier fire in Morrisania less than a mile away.

The FDNY said Tuesday that the cause of the fire was accidental and electrical. A smoke alarm in apartment 2A did not activate but alarms went off in many other apartments throughout the building.