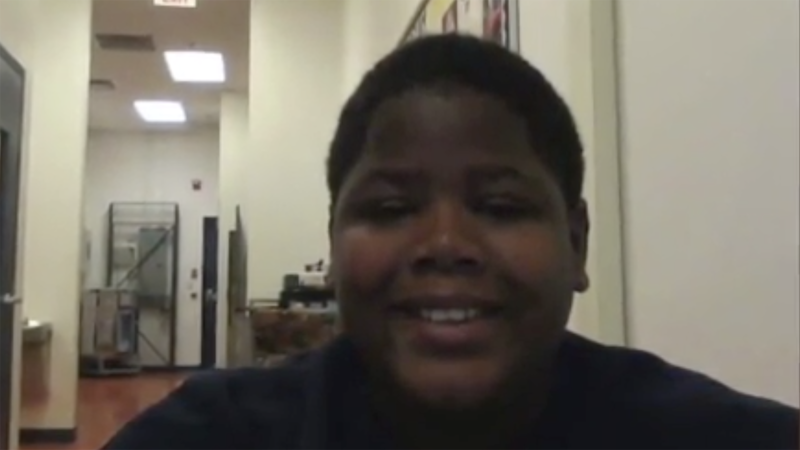 KALAMAZOO, Mich. -- Three staff members of a Michigan youth center have been charged in the death of a Black teenager who died while being restrained after throwing a sandwich, Kalamazoo County Prosecutor Jeff Getting announced Wednesday.

Cornelius Fredericks, 16, died May 1, two days after he lost consciousness while being restrained by staff at Lakeside Academy. The Kalamazoo County Medical Examiner's office confirmed Fredericks' manner and cause of death was a homicide.

Michael Mosley of Battle Creek, Zachary Solis of Lansing and Heather McLogan of Kalamazoo are charged with involuntary manslaughter and second-degree child abuse.

Mosley and Solis are also accused of restraining Fredericks in a "grossly negligent manner," Getting said. McLogan is accused of gross negligence for allegedly failing to seek medical care for the teen in a timely manner.

Getting, who called Fredericks' death a "tragedy beyond description," said the accused employees are expected to turn themselves in for arraignment but didn't say when that would happen.

Dr. Ted Brown, who performed the autopsy, said Fredericks had been restrained on the ground, resulting in asphyxia.

"In my opinion, the complications of him being restrained, on the ground in a supine position by multiple people, is ultimately what led to his death," Brown said.

More than two million people signed a petition demanding an independent investigation into the 2019 death of 23-year-old Elijah McClain.

"We will continue to fully cooperate throughout this process to ensure justice is served," the company said in the statement. "Additionally, we are committed to making the necessary changes to ensure something like this never happens again within our organization."

Efforts to contact Mosley, Solis and McLogan for comments on the charges filed against them were unsuccessful Wednesday because telephone numbers for the three couldn't immediately be found.

Sequel said it fired the three workers involved in Fredericks' death and relieved the executive director of Lakeside Academy of his duties.

"It is time for the perpetrators to come clean," Fieger said in a statement.

From June 2020: An ABC News investigation in partnership with ABC Owned Television Stations revealed that in 800 jurisdictions, black people were arrested at a rate five times higher than white people in 2018.

In a civil lawsuit filed Monday against Lakeside Academy and Sequel Youth and Family Services, the family said the teen screamed "I can't breathe" as staff members placed their weight on his chest for nearly 10 minutes.

Fredericks went into cardiac arrest April 29. At the time, authorities said he was being restrained by staff after throwing a sandwich.

"The excessive use of restraints and the lack of concern for Cornelius' life draw an eerily similar comparison to that of George Floyd's death," according to the lawsuit, which alleges negligence and says Lakeside staff improperly and wrongfully used restraints on Fredericks.

The lawsuit seeks damages allowed under the Michigan Wrongful Death Act. No financial amount was specified.

Lakeside Academy, a facility for teenagers with behavioral problems, last week lost its contract with the state of Michigan to care for youth in the state's foster care and juvenile justice systems and its license to operate.
Report a correction or typo
Related topics:
michiganteen killedu.s. & worlddeath in custodyrace in america
Copyright © 2021 by The Associated Press. All Rights Reserved.
TEEN KILLED
Remembering Junior: 3 years since Lesandro Guzman-Feliz's murder
Manslaughter charge in teen's stabbing death over parking spot
Remembering Junior: 3 years since Lesandro Guzman-Feliz's murder
Charges pending after teen stabbed to death in fight over parking spot
TOP STORIES
NYC voters head to the polls, all eyes on mayoral race
Voting hours, the candidates and more to know about NYC's mayoral primary
NYC Primary: What is ranked choice voting?
When will we know who wins NYC's mayoral primary?
Here's why each of the 8 Democrats say they want to be mayor of NYC
AccuWeather: Mostly sunny, but watch for rip currents at the beach
Tourist punched, hit with bottle in unprovoked assault on subway
Show More
Corbin Bleu announced as 2021 Jimmy Awards host
Golden Retriever Chunk, missing for 2 weeks, rescued from Barnegat Bay
MTA sets pandemic-era ridership records on subway, LIRR, Metro-North
'Mare of Easttown' fans warned to stop trespassing
Man fatally shot in BMW over $3,000 chain in Upper Manhattan
More TOP STORIES News