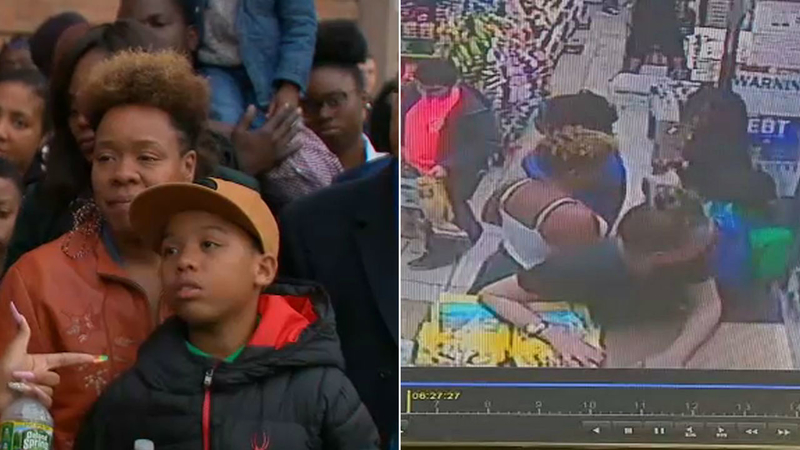 FLATBUSH, Brooklyn (WABC) -- The 9-year-old boy at the center of last week's "Cornerstore Caroline" incident.was among those on hand at a community conversation Monday evening hosted by Brooklyn Borough President Eric Adams.

Jeremiah Harvey fought back tears at the meeting to deliver a simple message. "Friendship is really the key," he said.

During the incident, a white woman, Teresa Klein, falsely accused the boy of grabbing her backside at a deli in Flatbush.

In what has since become a viral video on social media, Klein begged for police to be sent immediately, prompting terrified cries from the boy and his younger sister as they held onto their mom.

Adams gathered the community back to the Flatbush deli to discuss racial tolerance and try to make this a teachable moment. "Our goal is to hear your voices and let everyone know what's happening," he said.

"What happened to us respecting one another, having unity and being neighborly, did we forget that?", said Jeremiah's mother Someko Bellille.

Klein returned to the bodega Friday and watched the surveillance video inside the store along with the press. The footage clearly shows the boy's hands in plain sight, and it was his book bag that accidentally grazed her.

"I don't forgive this woman at all, and she needs help," said Jeremiah.

Klein, who has lived in Flatbush for four years, claims she has received an overwhelming amount of phone calls and threats since the incident. She also maintains the boy's mother claimed to be a cop and threatened her life, and she still would like to pursue charges.

Watch the meeting below: