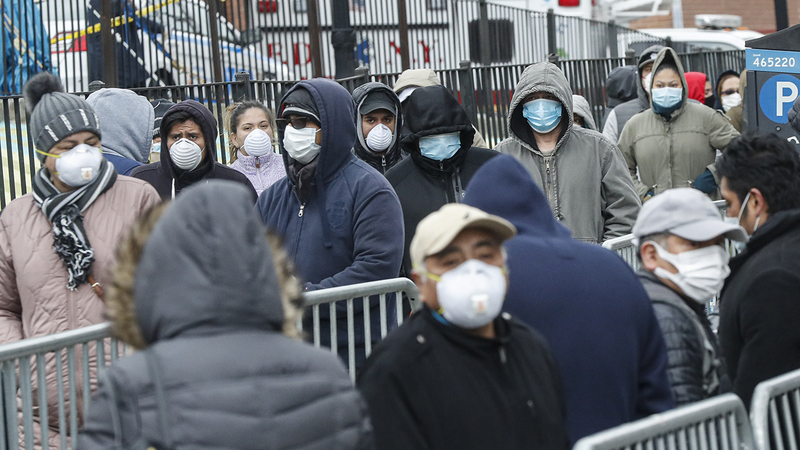 NEW YORK -- The human and economic toll of the lockdowns against the coronavirus mounted Thursday as India struggled to feed the multitudes, Italy shut down most of its industry, and a record-shattering 3.3 million Americans applied for unemployment benefits in a single week. The number of cases in the United States climbed above China, where the virus originated late last year, to become the world's highest.

As the number of infections worldwide reached a half-million and deaths climbed past 23,000, the damage to people's livelihoods and their well-being from the effort to flatten the rising curve started to come into focus.

In India, where the country's 1.3 billion people were under orders to stay home, legions of poor were suddenly thrown out of work, and many families were left struggling for something to eat.

"Our first concern is food, not the virus," said Suresh Kumar, 60, a bicycle rickshaw rider in New Delhi whose family of six relies on his daily earnings of 300 rupees, or $4. "I don't know how I will manage."

India has the world's second-highest number of people living in extreme poverty. Rickshaw drivers, produce peddlers, maids, day laborers and other low-wage workers form the backbone of the economy, and many live day to day on their pay and have no savings to fall back on.

The Indian government announced a 1.7 trillion rupee ($22 billion) economic stimulus package that will deliver monthly rations of grain and lentils to a staggering 800 million people.

On Thursday, a running count kept by Johns Hopkins University showed the United States now had the most confirmed cases of any country, with more than 82,000. Italy and China, the latter of which was the origin of the outbreak late last year, both had more than 80,000. Collectively the three countries accounted for about half the global total.

Louisiana was quickly becoming another smoldering hotspot. The number of new cases there jumped by more than 500 Thursday, for a total of over 2,300, with 86 deaths, including a 17-year-old, the health department said. The higher infection numbers reflected an increase in testing. New Orleans was gearing up for a possible overflow at hospitals, with plans to treat as many as 3,000 patients at the city's convention center.

From New York's Fifth Avenue and London's Piccadilly Circus to the boulevards of Paris and the streets of Rome and Madrid, restaurants, hotels, airlines, giant chains and small shops are all shuttered, and factories across both continents have ground to a halt, as cities, states and entire countries have ordered the closing of nonessential businesses and instructed people to stay home.

Companies in Europe are laying off workers at the fastest pace since 2009, according to surveys of business managers. And the U.S. is bleeding jobs as well: The number of Americans applying for unemployment benefits last week was nearly five times the old record, set in 1982.

Dann Dykas, 37, of Portland, Oregon, was laid off from his job helping design and set up displays for trade shows.

"Everything is so surreal," he said. "I can't even get an interview for another job, and we now have to worry more about being careful and taking care of ourselves."

In Georgia, 33-year-old Ian Smith was let go from his job at a wine bar and is working "side hustles" and relying on the generosity of friends.

"On my worst days, it's hopelessness, and on some of my better days, it's 'What possibility can I create in all of this?'" he said. "I can't pretend that I always feel that, though."

In a rare positive sign, stocks rallied on Wall Street for the third straight day after an unprecedented $2.2 trillion economic rescue package to help businesses, hospitals and ordinary Americans pull through the crisis won passage in the Senate. The Dow Jones Industrial Average jumped more than 1,350 points, or over 6%.

The rescue plan, which is expected to be voted on in the House on Friday, would dispense checks of $1,200 per adult and $500 per child.

RELATED: What is quarantine? Can it stop COVID-19?

President Donald Trump, meanwhile, announced that federal officials are developing guidelines to rate counties by risk of virus spread, as he aims to ease the restrictions meant to slow the outbreak.

Italy, the eurozone's third-biggest economy and a major exporter of machinery, textiles and other goods, became perhaps the first Western developed nation to idle most of its industry, extending a shutdown on smaller, nonessential businesses to heavy manufacturers.

Among the companies in Italy that have shut down or rolled back production: Fiat Chrysler, Ferrari, Pirelli tires and Luxottica eyewear, maker of Ray-Bans and Oakleys.

The industrial lobby Confindustria estimates a cost of 70 billion to 100 billion euros ($77 billion-$110 billion) of national wealth a month if 70% of companies are closed, as anticipated.

Elsewhere around the world, South Africa, with the most industrialized economy in Africa, headed into a three-week lockdown starting Friday. The country is already in recession, with an unemployment rate of 29%.

And Britain unveiled another relief effort, this time aimed at the gig economy, many of whose workers are facing financial ruin. The government will give the self-employed grants equal to 80% of their average monthly profits, up to 2,500 pounds ($2,975) per month.

__ In New York, the state's death toll jumped by 100 in one day, pushing the number to 385, Gov. Andrew Cuomo said. He added that experts expect the number to increase as critically ill patients who have been on ventilators for several days succumb to the virus. "That is a situation where people just deteriorate over time," Cuomo said.

__ China said it is temporarily barring most foreigners from entering as it tries to curb imported cases. Reports of new infections from inside the country have stopped.

__ In the Mideast, Saudi Arabia announced a total lockdown on the capital, Riyadh, and Islam's two holiest cities, Mecca and Medina, in addition to a nationwide curfew. In the United Arab Emirates, authorities announced an overnight weekend lockdown and used drones to tell people to stay home.

__ The leaders of the Group of 20 major industrialized nations held a video summit for safety reasons and vowed to work together to confront the crisis but made no specific commitments.

__ In Brazil, the country's governors are defying President Jair Bolsonaro over his call to reopen schools and businesses, dismissing his argument that the "cure" of widespread shutdowns is worse than the disease. As of Thursday, the country had more than 2,500 cases and 59 deaths.

For most people, the coronavirus causes mild or moderate symptoms, such as fever and cough that clear up in two to three weeks. For some, especially older adults and people with existing health problems, it can cause more severe illness, including pneumonia and death.