AP
By MITCH WEISS and HOLBROOK MOHR
After being confined to a hotel room in Peru and watching "heavily armed guards" patrolling the streets, Linda Scruggs was awash with emotions Saturday when she glimpsed out the airplane window at the Florida Everglades below.

Scruggs and her traveling companion, Mike Rustici, were among dozens of American citizens who caught a LATAM Airlines flight to Miami after being trapped for days in the Peruvian capital of Lima. Like thousands of U.S. tourists and Americans living abroad, the couple was caught in limbo as nations closed their borders to try to stop the spread of the deadly new coronavirus. For days, the couple didn't know how or when they would make it home - especially after the State Department essentially told them they were on their own.

"I never had this feeling before even after 9/11," she said after the plane landed. "I was filled with gratitude, relief, concern and sadness that our country isn't doing more."

Scruggs and Rustici, both in their 40s and from Nashville, Tennessee, had flown to Peru with plans to hike Machu Picchu's complex of Inca ruins, but within days after they landed, Peruvian President Martín Vizcarra declared an emergency, ordering the country's borders closed.

They said they were only given about 24 hours' notice to leave Peru but couldn't find a flight. The virus has caused more than 12,000 deaths around the world, but the figure goes up every day as Americans in Morocco, Ecuador and other nations struggle to find a way home.

For most people, the new virus causes only mild or moderate symptoms, such as fever and cough. For some, especially older adults and people with existing health problems, it can cause more severe illness, including pneumonia. The vast majority recover.

U.S. Secretary of State Mike Pompeo said Friday that he is working to repatriate Americans. But Scruggs and Rustici said they got little help or information from the State Department, a sentiment expressed by Americans trapped in other countries. The State Department did not respond to messages seeking comment.

"I think we're still processing it," Rustici said. "A big mixture of relief and guilt, it's almost like survivor's guilt. We know that there are so many people still over there and we've been doing so much the last four or five days to get ourselves and everybody else out and we managed to do so because we're savvy travelers. We had the resources to keep moving and try a lot of things, but in the end, we just got really lucky."

Scruggs and Rustici were in the hotel room Saturday morning when they received an email from a local tour operator saying there might be seats on a flight from Lima to Miami. They paid $800 each and took a bus to the airport with other Americans trying to catch the same plane.

There were about 200 people waiting outside the airport when they arrived and a security guard took them inside, where they faced what Scruggs described as a "tense and chaotic" scene with long lines. Some Americans were accompanied by babies and children.

"When we arrived at the airport it was a bit of a chaotic scene, we were at a locked gate and it was still dark and there were some people, stranded travelers there sleeping with their luggage outside of the gate with desperate hopes, alongside some local homeless people all over there. It was a hard and little scary scene," Rustici said.

Shortly before noon, the couple boarded the plane.

Scruggs, a nurse, said some tourists in Peru are running low on life-sustaining medications like insulin and that some foreign college students trapped in the country were running out of money for food.

Desperate to get home, Scruggs and Rustici used social media to connect with hundreds of other tourists who were trapped in the country, trying to draw attention to their plight by reaching out to elected officials and reporters.

"I think everyone has been shocked at the lack of communication from the U.S.," Scruggs said.

Dora Figueiredo, 37, an American from Newark, New Jersey, was trying Friday to determine whether her flight from Argentina to the U.S. would leave as scheduled on Sunday.

She had traveled to Buenos Aires to marry her now-new Argentine husband who cannot yet move to the U.S. because he doesn't have U.S. residency, a process she said could take more than a year.

"I'm feeling a bit stressed out about how to get home now that the Argentinian president announced a lockdown as of midnight last night," she said. "I have been tweeting at my airline, my embassy at travel.gov about how to get back home."

As of Friday, her flight had not been canceled but she wasn't sure if that would still be the case Sunday and did not know how she would get to the airport.

"I really need to get home to check on my parents, who are elderly," she said.

Scruggs also needs to check on her mother, who's in a nursing home. And she's bracing herself for what's ahead. She knows America has changed so much in just the short period since she's been away. President Trump has declared a national emergency because of COVID-19. Schools have been canceled in many states. Other communities across the country are in lockdown. Still, when she got off the plane, she didn't sense the same urgency she did in Peru.

"There are more people in Peru wearing masks than here. Hotel workers, taxicab drivers, police, all airport staff. But hardly anybody in Miami had masks. There were no health checks," she said.
Report a correction or typo
Related topics:
travelcoronavirusu.s. & worldtourism
Copyright © 2020 by The Associated Press. All Rights Reserved.
CORONAVIRUS 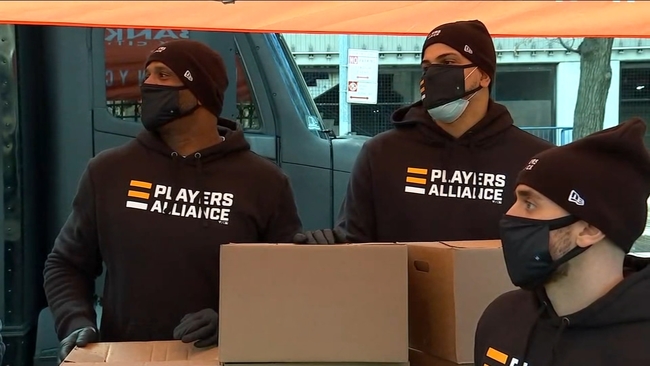