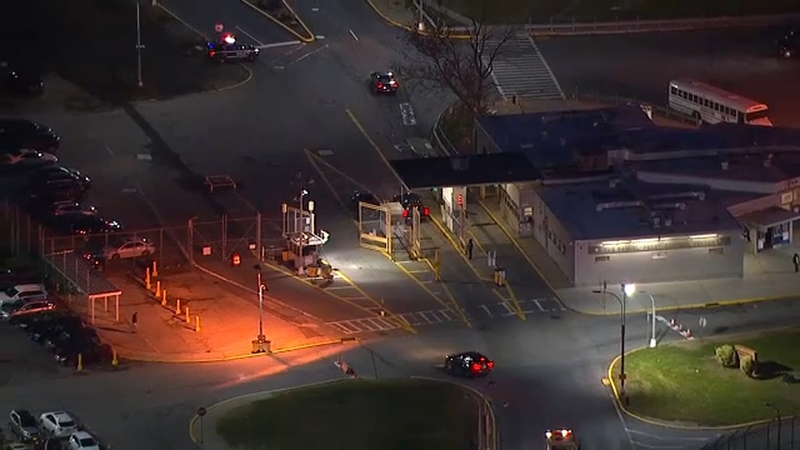 RIKERS ISLAND, New York (WABC) -- A correction officer was hospitalized after he was allegedly attacked and injured by an inmate at Rikers Island early Thursday.

The officer was apparently struck in the head with a piece of wood around 4:30 a.m. in the Otis Bantum Correctional Center.

The victim was taken to Elmhurst Hospital for treatment of a minor injury.

The incident is under investigation by the city's Department of Correction.

"Today's attack on a Correction Officer on Rikers Island is deeply troubling," Deputy Commissioner for Public Information Peter Thorne said. "The safety and security of our personnel is a top priority, and we have zero tolerance for violent behavior towards our officers and non-uniform staff. We are pursuing re-arrest of the detainee with the Bronx district attorney."

It's not yet known how the inmate obtained the wood.

The suspect was removed from general population, and the investigation is ongoing.

"Early this morning, one of our Correction Officers assigned to OBCC on Rikers Island, was assaulted by an inmate, a member of the Bloods Gang, who came up to the officer from behind and stabbed him in the neck with a wooden object. Thankfully, the officer did not sustain serious injuries and is doing OK. This violent, unprovoked attack, is yet another example of how the city's soft on crime approach has emboldened the inmates to commit more crimes behind bars, knowing full well that they will suffer no consequences for their actions. The culture of violence brought to us from the streets is going to return to the streets if inmates like this are let go. Instead of giving inmates who assault our members a free pass or making us wait seven years for safer jails, the city needs to start listening to us and make the jails safer now."

Despite Husamudeen's statement, authorities stressed that the officer was struck and not stabbed.