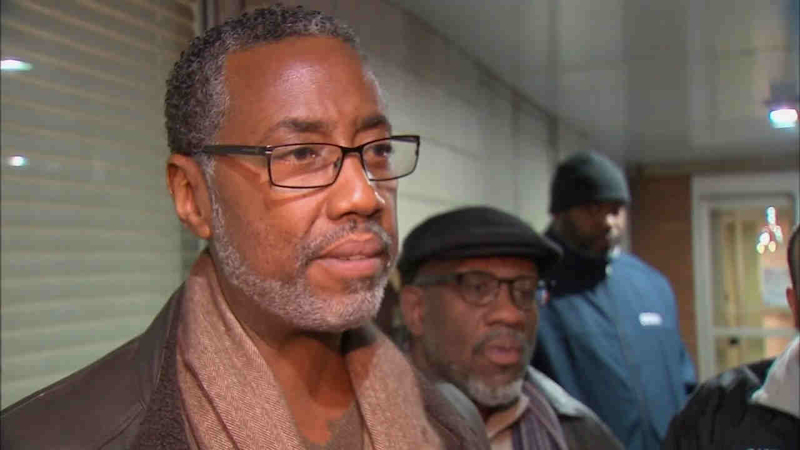 According to the criminal complaint, the longtime head of the nation's largest municipal jail guard union was paid tens of thousands of dollars in cash, delivered in a Ferragamo handbag, in exchange for steering $20 million in union money to a hedge fund.

Federal agents spent hours Wednesday morning going through Seabrook's home in the Bronx after he was arrested around 6 a.m.

The arrests are the latest development in a series of overlapping public corruption investigations coordinated by U.S. Attorney Preet Bharara, with other targets including high-ranking New York Police Department officials and political fundraising activities of people with ties to Mayor Bill de Blasio. One of the Brooklyn businessmen at the center of that investigation, Jona Rechnitz, is believed to have referred Seabrook to Huberfeld.

Speaking with reporters Wednesday, Mayor de Blasio insisted Seabrook's indictment has nothing to do with him, despite the common financier, and the mayor blasted the union leader:
EMBED More News Videos

Dave Evans has details on the mayor's reaction to the arrest of Norman Seabrook.

According to the criminal complaint, Seabrook received hundreds of thousands of dollars in bribes in exchange for his investment of Correction Officer Benevolent Association money into Huberfeld's Platinum Partners, a Manhattan hedge fund. Seabrook "made decisions about how to invest the nest egg for thousands of hardworking civil servants based not on what was good for them but on what was good for Norman Seabrook," Bharara said.

In 2014, Seabrook reportedly directed a total of $20 million of COBA money to Platinum. After both COBA and Platinum were subpoenaed in 2015, no further money was invested.

The complaint appears to corroborate many of the claims raised by a union official in a state lawsuit last year. The official said Seabrook made risky multimillion-dollar investments in a hedge fund without board approval.

The complaint says that though Seabrook was promised more for his investments, he ultimately was paid $60,000 stashed by a middleman in an $820 bag bought at "one of Seabrook's favorite stores, Salvatore Ferragamo on Fifth Avenue," before handing it to the union boss at a meeting in Manhattan in December 2014. Investigators searching Seabrook's home recovered the luxury bag and 10 pairs of Ferragamo shoes, prosecutors said.

Seabrook allegedly traveled with former NYPD Chief of Department Philip Banks and the two Brooklyn businessmen at the center of the current corruption investigation to Israel and the Dominican Republic, and the complaint says that while in the Dominican Republic in 2013, after he had been drinking, Seabrook complained to a confidential witness, who already pleaded guilty and is cooperating with the federal government, that he worked hard to invest COBA money and didn't get anything personally from it.

Seabrook allegedly said it was time that "Norman Seabrook got paid."

"It's disgusting and very, very sad if he defrauded his own pension fund, he took money that was meant for his workers' retirement, and put it in his own pocket," de Blasio said. "Obviously his members entrusted him to take care of his pension fund.

De Blasio said he has not spoken to Seabrook for several months, and he called the city's relationship with the union "very fraught" over the years.

"We have a lot we are trying to change on Rikers Island," he said. "Sometimes he was willing to work with us, sometimes he wasn't."

Federal prosecutors do not claim that the union lost money as a result of Seabrook's investment in Platinum's fund, and union representatives did not immediately respond to requests for comment.

Huberfeld has prior arrests, including a 1993 fraud conviction. He also had to settle a separate action with the SEC in 1998.