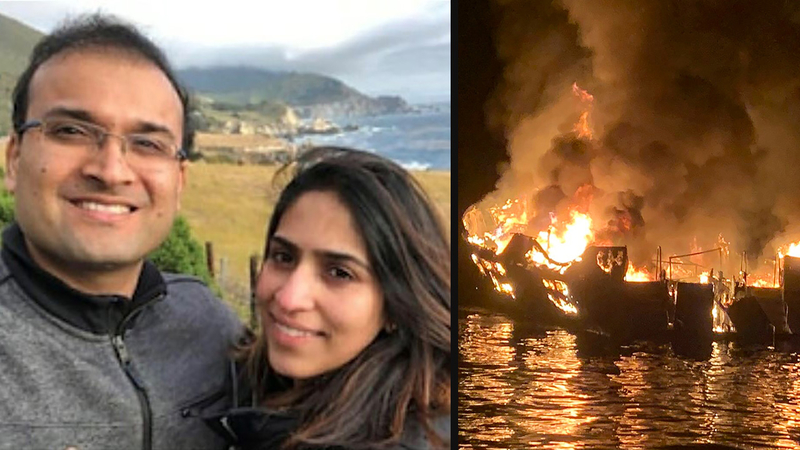 VENTURA COUNTY, California (WABC) -- A couple who lived in the New York area were among the 34 people who died in the deadly dive boat fire off the coast of Los Angeles last weekend.

Crew members said they tried to save those sleeping below deck before smoke and flames forced them to abandon ship. Two of those victims were Kaustubh Nirmal and Sanjeeri Deopujari, both Indian nationals, who married two years ago.

Deopujari -- from Nagpur in central India -- was a dentist in Norwalk, while Nimral, who grew up in Jaipur, worked in finance.

"They loved sports adventures and were so full of life," Sharma said. "What happened to them was unbelievable. Imagine being burnt to death, and they were sleeping, defenseless. Imagine what their parents are going through. I am so sorry to write this, but they were too young to die. They had just started their lives"

Searchers recovered 33 bodies and continued searching in the waters just off Santa Cruz Island for the lone remaining victim.

Related: Boat owner says crew 'had no choice but to evacuate the boat'

The NTSB is just a few days into what will be a lengthy investigation that seeks to determine the cause of the fire and identify potential safety enhancements to avoid future disasters. Investigators are examining potential ignition sources for the fire, including electronics, kitchen stoves and the vessel's wiring systems. Investigators know photography equipment, batteries and other electronics were stored and plugged in on the Conception.

"We are not ruling anything out at this point," the NTSB's Jennifer Homendy said Thursday.
None of the names of the victims have been released by authorities but many have surfaced through relatives, friends and employers.

They included two Northern California high schoolers, a hairdresser, software engineers, a special effects designer for Disney, a nature photographer, a nurse and a family of five celebrating a birthday.

On Thursday, California Gov. Gavin Newsom issued a statement identifying two of the victims as Adrian Dahood-Fritz and her husband, Andrew Fritz. Dahood-Fritz had worked for the California Natural Resources Agency's Ocean Protection Council since April as a senior environmental scientist.

"Adrian led the state's efforts to manage California's network of marine protected areas, and she cared deeply about the ocean and biodiversity," Newsom said. "She embodied marine conservation and was a highly accomplished and respected scientific researcher."