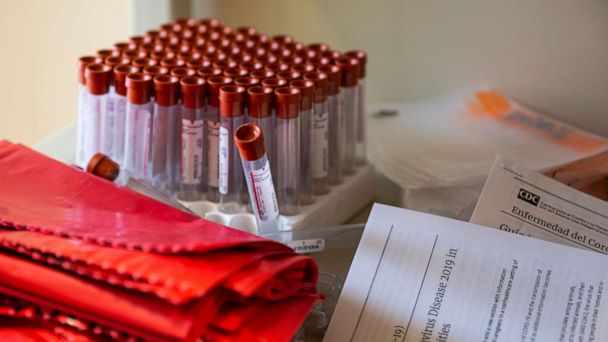 As the novel coronavirus continues to spread across the country, those who are not infected can protect themselves by avoiding close contact with others and aggressively washing their hands. But beyond this, many are desperately hoping for another form of protection: a vaccine.

Vaccines work by exposing our bodies to something that resembles a certain pathogen, training our immune systems to recognize, attack and kill the invader. When presented with the real pathogen itself, our immune armies are ready to fight.

While not a treatment or cure, vaccines can help eradicate a disease by starving the virus of people to infect and transmit the disease.

Vaccines are especially needed by health care workers on the front lines and other vulnerable members of the population who have a higher risk of contracting the infection.

While the race to develop a COVID-19 vaccine is well underway with over 40 hopeful candidates, only three have entered "Phase I" of clinical trials, the first of three stages of human testing before drug approval.

Phase I testing is only a test to see if the vaccine is safe. Researchers won't know if it's effective until Phase II is studied. Below is a brief overview of these three candidates, plus three promising ones that are still in earlier stages of development.

mRNA-1273: The front-runner in the U.S., which is backed by the NIAID and developed by Moderna Therapeutics, is based upon a specific type of genetic material, mRNA. This vaccine, mRNA-1273, codes for a specific protein on the novel coronavirus -- the "spike protein" - the key into a human cell. An mRNA-based virus has never been approved for use in humans, but animal studies have been promising. This particular vaccine, however, was rushed to human trials before it was even tested in animals -- skipping a step in traditional vaccine development.

A Phase I trial testing the vaccine's safety in 45 healthy adult volunteers began earlier this month at Kaiser Permanente Washington Health Research Institute in Seattle. The participants will receive two injections of low, medium or high doses of the vaccine and be monitored for any adverse events or immune response. The company is hopeful that it may have a vaccine as early as fall 2020 for some particularly vulnerable groups, such as health care workers. The Phase I safety study should be completed by June 2021.

Ad5-nCoV: The front-runner across the globe, Ad5-nCoV, was developed by the Beijing Institute of Biotech and CanSino Biologics, a Chinese biopharmaceutical company. This vaccine uses a viral vector, a virus that has been engineered to not contain its infectious properties and instead delivers genetic material to the recipient. Phase I testing of this vaccine is underway at Hubei Provincial Center for Disease Control and Prevention, where 108 healthy adult volunteers will receive one of three doses of the vaccine to assess for safety. Ad5-nCoV is perhaps the most promising because CanSino has already produced a nearly identical vaccine, Ad5-EBOV, to protect against Ebola. The Ebola vaccine has already entered Phase II testing, meaning it's even further along. Still, the official anticipated completion date for Ad5-nCOV safety testing is December 2020, with all testing completed by 2022.

ChAdOx1: The University of Oxford is one of the most recent groups to bring its vaccine candidate into human studies -- a major milestone. The vaccine is simultaneously being tested for both safety (Phase I) and efficacy (Phase II) by injecting 510 healthy participants with either vaccine or placebo. This vaccine uses an inactivated (non-infectious) virus that contains genetic material for the key protein on the novel coronavirus, similar to Ad5-nCoV in China. This viral vector, however, was derived from chimpanzees which, the researchers argue, creates an even more robust response than other viruses to which humans may have already been exposed. This vaccine is being funded by the United Kingdom government and is moving quickly. Still, its anticipated completion date of this phase isn't until May 2021.

BNT162: Biopharmaceutical giant Pfizer, along with partner company BioNTech, is working on an mRNA-based vaccine that is similar to Moderna's model. The duo was already working on an influenza vaccine using this scientific strategy so their vaccine candidate, "BNT162," is moving particularly fast. Clinical trials are anticipated to begin in April in both the U.S. and Germany.

INO-4800: An entirely different technology is being developed by Inovio Pharmaceuticals, a company that uses a proprietary platform for "activation immunotherapy." This vaccine delivers DNA, another genetic material, into a host's cells by utilizing a hand-held smart device "CELLECTRA." The DNA is translated into proteins that activate an individual's immune system to generate a targeted immune response. While that may sound like science fiction, the company has used the same technology to rapidly advance vaccines against MERS, a closely related coronavirus, and HPV-related cervical precancer, among others. None of these, however, have completed their trial phase and entered the market. Trials for the COVID-19 specific vaccine, INO-4800, are anticipated to begin in April.

Sanofi recombinant DNA vaccine (unnamed): Last month, Sanofi Pasteur announced that it was partnering with the U.S. Department of Health and Human Services to create a DNA-based vaccine. Their vaccine, which is yet to be named, relies on recombinant (engineered) DNA that encodes for proteins found on COVID-19 surface -- the same basic principle of many of the other candidates. The company had been previously working on a vaccine for SARS, a close relative of the novel coronavirus, which showed promise in animal models. More importantly, however, Sanofi has proved immensely successful in the vaccine market: they have influenza vaccines, including Flublok and Fluzone, that are widely in use today. They claim that their technique -- and their experience with mass production of their products -- would allow a COVID-19 vaccine to be introduced much more quickly than traditional production methods. Still, human trials are yet to begin but will likely start in April.

Suspect on the run in CT murders may be in Maryland
Times Square billboards to momentarily go dark Wednesday evening
4 hit by falling tree branch on Upper West Side
Price hike: New Jersey to increase tolls on 2 major highways
Long Island enters Phase 1 of reopening, but not everything open
Show More
AccuWeather: Clouds, humidity spotty showers
County rejects NCC plan to cut programs for students with autism
Wild crash ends with car on side of Long Island building
No prom? No problem: 7-year-old holds special event for his nanny
Half of Americans would get a COVID-19 vaccine: Poll
More TOP STORIES News