Cowboys assist in the arrest of an alleged carjacking suspect 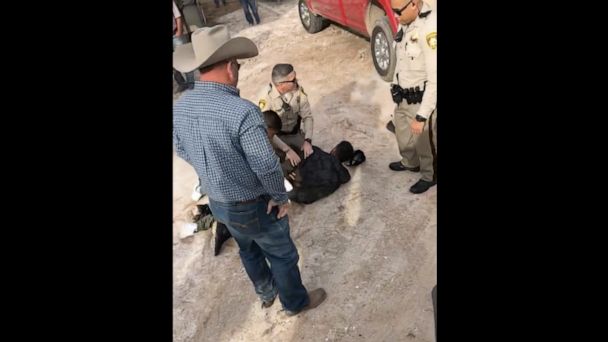 A Las Vegas "cowboy arrest" caught on video is going viral after the footage captured the moment several cowboys on horses yelled and threatened to lasso a man who was suspected of a carjacking.

The ordeal began when the Las Vegas Metro Police Department spotted a reportedly stolen car and attempted to stop it, according to ABC station KTNV in Las Vegas. The three people in the stolen car bolted out to escape but were met with the ropers on their horses.

"I noticed a helicopter flying in a circle right about us and then that's when I saw all the cop cars hauling, but I started kind of looking around and sure as heck I saw a guy running through the stalls and I yelled, 'There he is!' Cayden Cox, a cowboy and professional cattle roper, told ABC News. "So I turned my horse around and ran as fast as I could over there and about 30 other cowboys followed me."

"Right when I got to him, the guy just gave up and held his hands up and he was looking around, and right when I wanted to rope him, another cowboy on foot ran up behind him and tackled him," he said.

The cowboys stayed on the suspect until police arrived to arrest him, and the two others involved in the carjacking, KTNV reported. Las Vegas police told the station that it took all three people into custody.
Report a correction or typo
Related topics:
abc newsnational
Copyright © 2021 ABC News Internet Ventures.
More Videos
From CNN Newsource affiliates
TOP STORIES