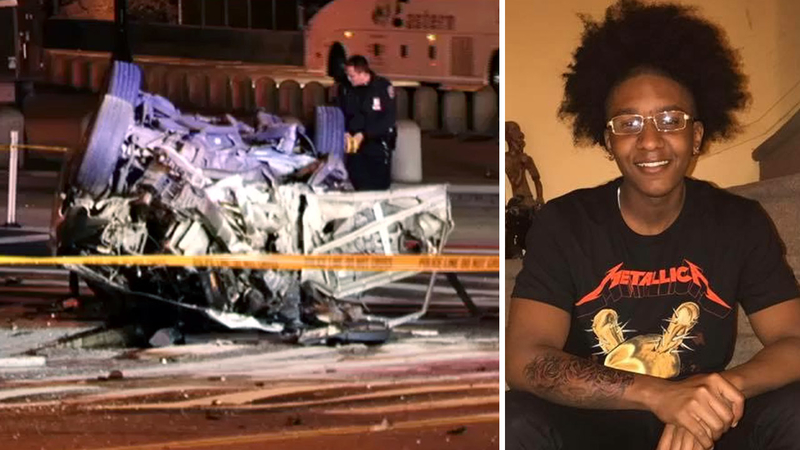 It happened just after 1 a.m. in the vicinity of Bowery and Canal Streets.

Police say 22-year-old Gerald Joseph was driving drunk when he lost control of his 2004 Mazda sedan while heading over the Manhattan Bridge, crashing into a fire hydrant.

The impact was so intense the fire hydrant was knocked loose and the car overturned catching fire.

The passenger, 17-year-old Shareef Bellerand, of Brooklyn, was trapped inside the vehicle and rescuers had to cut him out.

Bellerand's mother, Cindy Fabien, said her son suffered significant damage to his legs and lost a lot of blood in the crash. She said he died at New York Presbyterian Hospital.

The driver, Joseph, was able to get out of the vehicle and was taken to Bellevue Hospital in stable condition.

Fabien said Bellerand had spent the first part of Christmas with her and then left to celebrate with his father in New Jersey.

Fabien said her son surprised her, returning from his father's briefly just before 1 a.m., after he said he'd dropped off his uncle's mother-in-law with Joseph.

"I said, 'Shareef, your dad don't like you being with this guy,' and he said, 'He's OK,' and I said, 'You sure?' and he said, 'Yes Ma, and I'm OK," Fabien said. She said the two joked about some Beats headphones he still wanted and she implored him to get back safe.

That was the last time she says she spoke to him.

Fabien said she was shocked when she received the call from his father about their son about an hour later.

"I couldn't believe it," she said.

Confusion about what hospital Bellerand had been taken to initially made it hard to locate her son, who was not carrying identification.

"I prayed, I asked God, 'Please keep him safe. Let me know where he is,'" Fabien said. "After I called New York Presbyterian, I got that sick feeling, I was like, 'This is not good,' and when I saw four people coming towards me I knew."

Fabien described Bellerand, her first born, as someone who loved life, was well-behaved and looking forward to turning 18 in a couple of weeks.

"He was a good kid. I never had problems, not one day," Fabien said. "Right now, I'm trying to be strong but I know it's going to hit me later on that he's really gone, he's not here," said Fabien.

Joseph has been charged with driving under the influence. Police indicated more charges could follow.

Police records indicate Joseph has also had at least six prior arrests for offenses such as robbery and threatening his brother with a machete.

Police blocked off the area surrounding the crash as they investigated, causing delays to and from the Holland Tunnel and Manhattan Bridge.

The vehicle involved in the crash remained at the scene until about 1 p.m., when police towed it away.

Investigators are also reviewing surveillance video they obtained from the bridge and at least one nearby business in search of additional evidence.