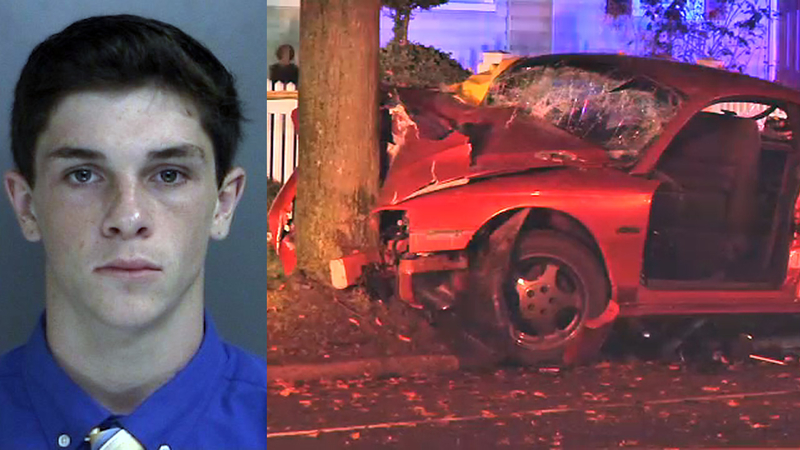 LINDENHURST, Suffolk County (WABC) -- The driver in a 2017 crash on Long Island that killed two passengers has been charged with vehicular homicide, vehicular manslaughter and driving while impaired by drugs.

Authorities say David O'Brien, now 18, was speeding and high on Xanax and marijuana just after 5 a.m. on October 9 when he slammed the 1998 Ford Mustang into a tree on North Wellwood Avenue near Lenox Street in Lindenhurst.

O'Brien posted on his Facebook page in November - one month after the crash - "I am so sorry with every piece of my heart for all of this. This was never meant to happen."

"Breaks our heart everyday, sitting at the cemetery," Galdorisi's mother Christine Galdorisi said. "He'll never have a chance to have a future."

Charmaine Cain, whose daughter was Miller's friend, said the family lives in Arizona.

"I feel sorry for his parents," Cain said "I definitely feel sorry for Maggie's family and for myself. My daughter, she's 17, she's really suffering hard. That was her best friend."

O'Brien and a backseat passenger, then 16-year-old Daniel Ozarowski, were injured. O'Brien was driving at least 50 mph in a 30 mph zone.

Anthony Galdorisi, Galdorisi's father, said he wishes O'Brien would be put in jail now. He said it's been a long, frustrating nine months.

"I wish we were here a lot sooner, but I'm glad we got to the first step," he said.

The crash left the community devastated at the loss of a pair of young lives.

"I have no tears to cry right now," Galdorisi's sister said at the time. "I've been crying all day. I'm sick to my stomach. He was, you know, a little quiet kid. But if you get to know him, he would make you smile and laugh."