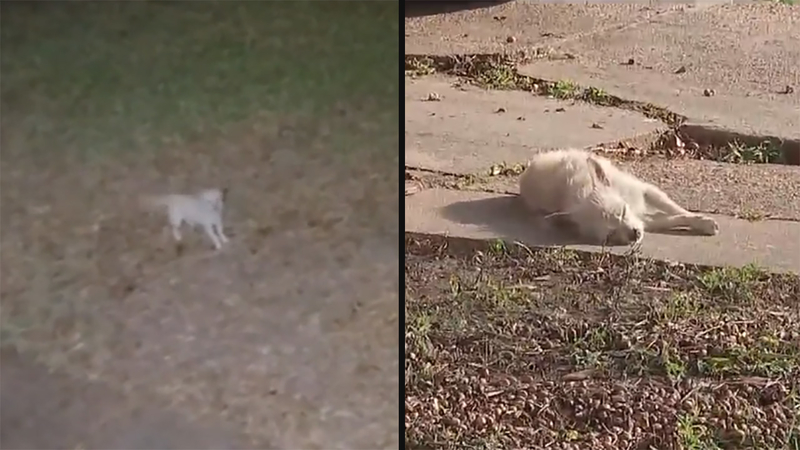 HOUSTON, Texas -- A teeny, tiny dog is being hailed a crime fighter in one neighborhood in Houston, Texas.

While the little pooch doesn't have a cape, he does have one serious bark.

A Ring camera captured the surreal sight last week at a vacant house on Chesterfield Drive in Sunnyside. The footage shows a would-be burglar roll up on a bicycle, carrying a giant stick with him.

Within seconds, a little dog appears and goes after the would-be crook.

Chester Wells is one of the property investors, and his Ring app alerted him to the action. He then remotely triggered a loud alarm, which also helped scare off bad guy off -- but the dog then chased him into the street.

"I'm thinking I'm not going to be able to ring the alarm fast enough before this person does any damage," Wells said. "Then out of nowhere, the dog comes racing around the corner. He engages the intruder, much braver than I would, for sure. He deters him long enough or becomes as much of a nuisance as possible for me to go ahead and ring the app. I had to figure out how it works. Sure enough, as soon as the app ringed, the dog chased him right out into the street. I've never seen him since."

Wells said the dog is a stray and doesn't have a name, but he plans to call him "McGruff."

Wells credits the dog with saving him thousands of dollars in repairs. He said a few days after this instance, McGruff scared off another would-be intruder.