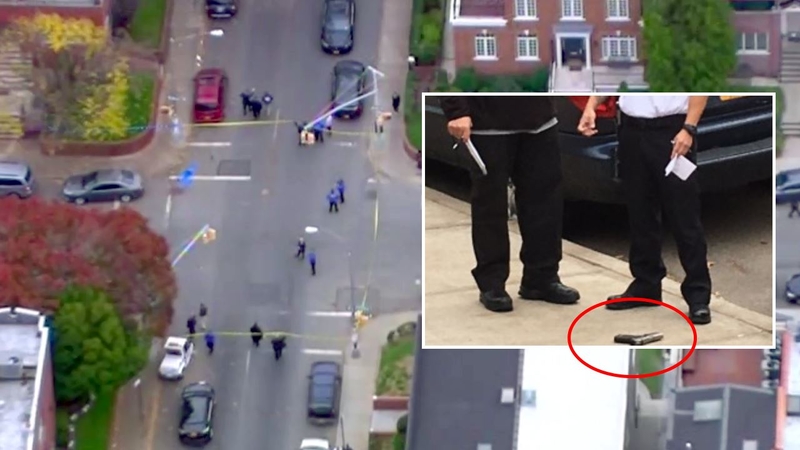 BROOKLYN, N.Y. (WABC) -- A man who was shot twice in a police-involved shooting in Crown Heights early Wednesday afternoon has been arrested.

Kareem Thomas, 24, of Brooklyn, was arrested and charged Thursday with criminal possession of a weapon and reckless driving.

The incident occurred in the 600 block of Montgomery Street just before 12:30 p.m. Authorities said an NYPD officer first tried to pull over Thomas' Ford Mustang GT after he spotted the vehicle speeding, but the suspect fled the scene.

"The white Mustang proceeds right behind him, speeding and driving recklessly in and out of traffic," said NYPD Chief of Patrol Carlos Gomez. "The officer turns around, begins to follow him."

He reportedly drove in the opposite lane of traffic at Empire Boulevard and Brooklyn Avenue before hitting a truck and stopping just short of a B43 bus.

Police said the suspect then jumped out of his car with a gun in hand and fled on foot, tripping and falling about a block away at the intersection of Brooklyn Avenue and Montgomery Street. The gun was on the ground, and officials said the officer ordered the suspect not to reach for it. When he did, the officer fired two shots, striking the suspect in the abdomen, according to police.

Viewer video of the suspect being arrested (courtesy JP Updates):


The officer who opened fire is a 14-year veteran. Thomas was struck in the lower abdomen and taken to Kings County Hospital, but he was reportedly conscious as he went into surgery. He is expected to survive.

Police said Wednesday that Thomas is a known gang member in Brooklyn. He has 15 prior arrests.

A .09-mm firearm was recovered at the scene.