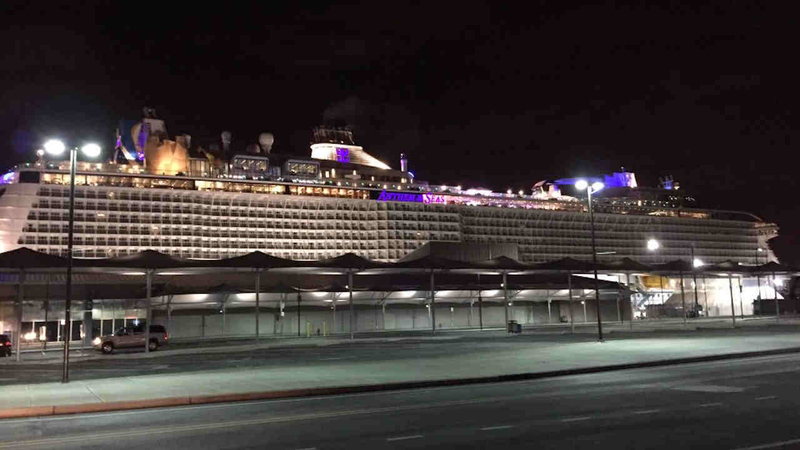 BAYONNE, New Jersey (WABC) -- The cruise ship that battered by a major storm in the Atlantic Ocean returned to its New Jersey port Wednesday night, and as passengers disembarked the Anthem of the Seas, steps on land marked the end of a rocky voyage.

The ship docked at Bayonne's Cape Liberty shortly after 9 p.m., its passengers cheering wildly. It was escorted by two tugboats and a Coast Guard vessel.

The world's third largest cruise ship traveled into a storm with 125 mile per hour winds, and passenger video captured the chaos on board as more than 6,000 people anxiously waited out the weather.

"We were slanted on like a 25-degree angle, so it was very stressful," passenger Tim Sacka said. "Four hours on a slant. We didn't know if we were going down or not."

Sacka and his wife Diane had hopes for a relaxing getaway.

Royal Caribbean is standing behind the captain and says it has now made changes to storm avoidance policies. But for these passengers, they are moments are now etched in memory of a vacation that wasn't.

Mary Robertson was with her grandson, and for them, it was a bonding experience.

"We're doing fine," she said. "I think it was wonderful. I mean, it was rocky, but can you imagine when Christopher Columbus came over? I mean, those were smaller ships."

Now, 6-year-old William Chandra will return home with a story, one of a ship set sail for treasured relaxation and a grandmother who helped him learn to be the calm in the storm.