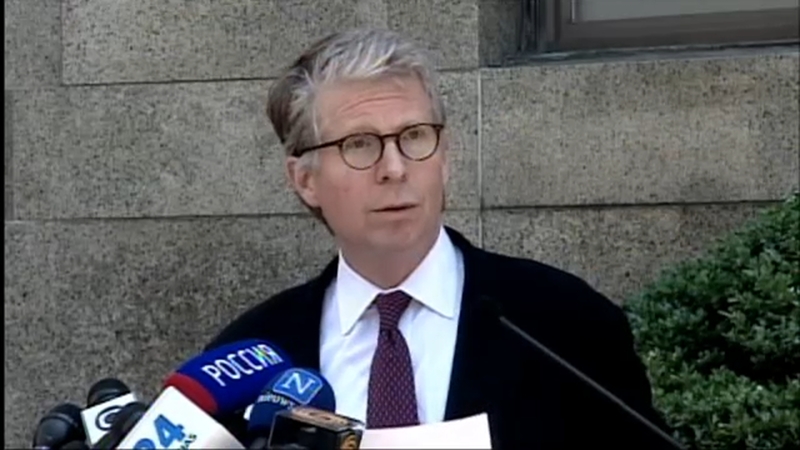 NEW YORK CITY (WABC) -- Manhattan District Attorney Cy Vance, Jr. has announced that he will not seek reelection for a fourth term in office, which would begin January 2022.

Vance informed his staff at 6 a.m. Friday, just as the New Yorker published a wide ranging interview with the outgoing Manhattan District Attorney, who was widely expected not to seek another term amid a crowded field of eight challengers.

"There's nothing worse than a politician who doesn't know when to leave," the 66-year-old Vance told the New Yorker.

Vance is currently weighing prosecution of former President Trump, who has denied wrongdoing and accused him and others of politically motivated "witch hunts."

The decision to charge Trump is expected before Vance leaves office.

The Democratic primary, which will all but determine the next district attorney, is in June.

Vance led some of the most high-profile and consequential courtroom victories in recent history, including Trump v. Vance and People v. Weinstein, along with aggressive, successful investigations against eleven of the world's biggest banks.

He then directed hundreds of millions of dollars in forfeited proceeds of the economic crimes committed by those banks to 50 community-grounded organizations that are supporting young people, crime survivors, and reentering New Yorkers in underserved Manhattan communities.

Here is the full text of Vance's announcement to colleagues and staff:

Eleven years ago, I asked our Manhattan community to return me to this extraordinary office where I began my legal career - a place where hundreds of the nation's best attorneys, supported by an exceptional professional staff of hundreds more, work every day to deliver justice, keep us safe, and leave behind a fairer system than the one we inherited.

At the time, I told my family and friends that I didn't aspire to be District Attorney for decades like my predecessors. I said that this wouldn't be a "forever job" for me or even my last job, although the fact is, serving the People of New York is the best job and biggest honor I'll ever have. Instead, I said I would give it my all for two or three terms, then begin a new chapter in my life and open the pathway for new leadership in the D.A.'s Office. I believed then - and I believe now - that change is a fundamentally good thing for any institution.

Today, I'm writing to let you know that I will not seek reelection as District Attorney. Knowing this wouldn't be a forever job doesn't make this announcement easy. I love this office. I love the community we serve. I love the work we are doing right now to uplift our neighbors, balance the justice system, and advance racial equity during this uniquely challenging, watershed moment in our City and country's history.
Most of all, I am grateful to all of you - the incredible people who have made this office the powerful and unwavering force for justice that it is today. Your unparalleled commitment to justice, public service, and community safety make me reluctant to leave. Your hard work and dedication, in thousands of cases that never make the news, continue to inspire me every day. But I have zero doubt that you will continue to serve, support, and advocate for New Yorkers with the same level of dedication that you have shown me and our community since 2010.

Looking back today over the last eleven years, I'm proud of what we accomplished. We've made our neighborhoods stronger and healthier, not only through proactive prosecutions that dismantled violent gangs and took thousands of guns from City streets, but with catalytic investments of the millions we seized from banks to support young people and reentering New Yorkers to help prevent justice involvement and recidivism. We've used discretion and diversion to slash our caseload by 58% - massively reducing our criminal justice footprint and the inequities that underlie unnecessary prosecutions. And we've expanded the perimeter of 21st century crimefighting in New York - having built a world-class cybercrime operation, a counterterrorism practice that has convicted international and white nationalist terrorists, and an aggressive approach to economic crime that has yielded billions in fines and forfeitures from big banks and executives.

In the past year alone, as an ongoing pandemic and racial justice reckoning have tested our City and our profession like never before, we have secured landmark victories in Trump v. Vance and People v. Weinstein, provided crucial lifelines and credible messengers through our Criminal Justice Investment Initiative, seamlessly transitioned to a new remote practice, and guaranteed the right to peaceful protest in the crossroads of the world. We are, every day, moving our justice system and our community forward.

There are no small cases - every case you handle is important to those affected by it, whether they are the survivor or the person accused. But for each of us, there are cases that speak to us about why we do this work. For me, when I think back on all of the cases of our time together, I keep returning to Etan Patz and his family. Because of this Office's unmatched talents and relentless pursuit of justice, we were able to solve one of the City's most infamous and formative unsolved crimes: the murder of a 6-year-old boy who left to catch the school bus on the Friday before Memorial Day in 1979, and was never seen again. For Etan and for his family, this Office never gave up. For thousands of crime survivors and their families - from small children to seniors - you have never given up. I know the emotional toll this exacts from each of you, and eleven years in, I continue to be amazed by your resilience every day.

Working here in the 1980s, I recognized quickly that the Manhattan D.A.'s Office - thanks to its jurisdiction, its expertise, and especially its people - was a uniquely special institution. Working here in 2021, I have never felt more optimistic about the future of this office after witnessing daily on Zoom and in socially distanced meetings the everyday acts of heroism in your public service. Thanks to you, the People of New York are in excellent hands.

Over the next few months, while the election goes on outside, our work - powered by your talent, ethics, and unbending professionalism - will continue. Inside, our investigations and trials - from the high-profile to the ones that never make the newspaper - will proceed. Our investments to uplift our neighborhoods during this hour of need will continue. And our mission to move our justice system forward will remain our driving force, because that mission is, by definition, never complete.

Muhammad Ali once said, "don't count the days, make the days count." For me, now that I've tipped the hourglass over, every minute of every day left as District Attorney counts to me more than ever. It's hard to convey the excitement and pride I feel about the continued opportunity to do this work over the next months with you, the finest group of lawyers and public servants I've ever known.

With great admiration and affection,
Cyrus