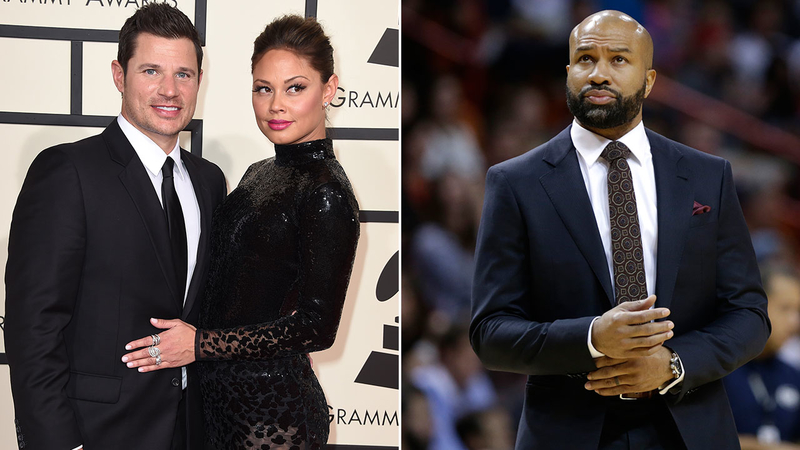 Nick and Vanessa Lachey, Frankie Muniz, Derek Fisher and more will try to wipe the ballroom floor with the competition on Season 25 of Dancing with the Stars, which premieres on Monday. This season will also see the first-ever official fantasy league for the show.

PHOTOS: Meet the cast of Dancing With the Stars season 25


Here's the full list of celebrities dancing this season:

After the announcement on Good Morning America, Kobe Bryant had a message for his former teammate Derek Fisher.

"I gotta say, on the list of all teammates that we've played with, yours was not at the top of the list, as far as guys that would be on Dancing with the Stars," Bryant said. "That being said, I wish you nothing but luck."

Though Nick and Vanessa Lachay are a team at home, they'll be competing against each other in the ballroom. Their partners will be Dancing's own married couple, Peta Murgatroyd and Maksim Chmerkovskiy.

"I've actually moved out of the house for the duration of the season, just to keep the peace," Nick joked, to which Vanessa responded, "No, America, we're still living together."

The couple also got a message from Nick's brother and 98 Degrees bandmate, Drew Lachey.

"I sure hope you beat Vanessa," he told Nick. "Because if you don't, she is never going to let you hear the end of it."

Reigning Mirror Ball champ Rashad Jennings also made an appearance to give this season's contestants some advice.

"Don't take yourself too serious," he said. "Have fun."

After the big announcement, the new cast posted fun tweets to get fans excited for their teams.

Time to introduce everyone to the "other" woman in my life @petamurgatroyd She's gonna turn me… https://t.co/97661UFj87

It's true... there's another man in my life! And he's helpin' Mama get her groove back! Dancing… https://t.co/Eg5y9b4agp

Honestly, you have no idea how excited I am for this! I know I'm in good hands with… https://t.co/PANTFzh7Pc

I can finally say YES it's true! Going 2 compete on @DancingABC this season! Meet my partner @artemchigvintse! What should our team name b?! pic.twitter.com/KykgWcLJsZ