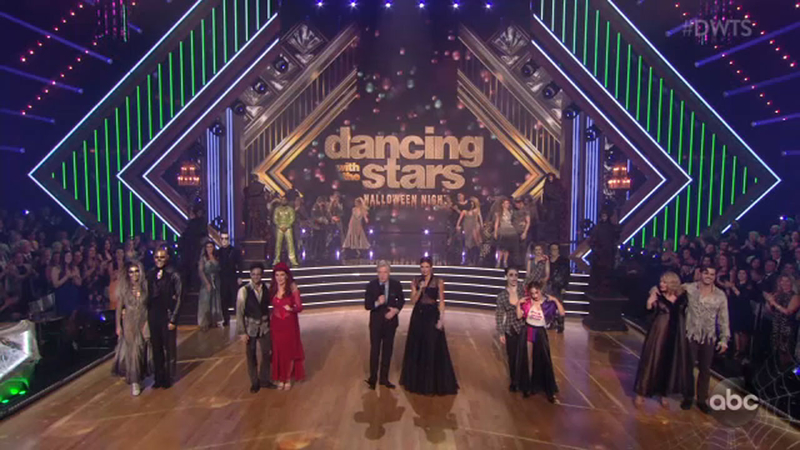 LOS ANGELES -- Eight couples were hoping for more treats than tricks in the ballroom for the latest round of "Dancing with the Stars."

While costumes are always an important part of this show, it really ramps things up when it's time for Halloween. We saw some terrifyingly terrific Tangos, positively pristine Paso Dobles, Jives and jazz numbers that jumped off the screen.

But there's more: team dances! Team Trick goes head-to-head with Team Treat for extra judges points. The scores are tighter than ever, but in the end, one couple is sent home, leaving seven still hoping to lift up a mirror ball trophy.

Here's a list of this round's scores, from highest to lowest:

Kel Mitchell- 27 out of 30
Kel and Witney break out the Jive to a favorite song from "Rocky Horror Picture Show" and they take the "Time Warp" to a new zone. Head judge Len Goodman commented that while they were rocking on the dance floor, he was reeling in his seat, and the routine was fast, fun and fearless. Bruno Tonioli loved how they reimagined a cult classic.

James Van Der Beek- 27 out of 30
Halloween is now, and has always been, James' favorite holiday. He thinks getting into costumes and characters when he was a kid helped spark his desire to act. He and Emma performed a Viennese Waltz to "I Put a Spell on You" and that's just what they did to the judges. Admittedly, the couple did have a little mishap on the dance floor, but each judge only dinged their score a point for that "incident."

Ally Brooke- 27 out of 30
Pro dancer Sasha loves scary things and Halloween. Not so much for Ally. So Sasha has the goal to make her fearless this week. It worked, with Bruno calling the routine a premiere league Tango that was full of content. Len also appreciated that there was no "messing about." Carrie Ann Inaba praised Ally for pushing herself to the edge.

Lauren Alaina-27 out of 30
Lauren nailed an Argentine Tango while wearing vampire teeth. Gleb choreographed a dance to the classic "Whatever Lola Wants", and Len actually said he saw plenty of what he wants in that routine. Carrie Ann told Lauren she is seeing her transformation into a dancer, and Bruno called her Marilyn Monroe meets vampire meets Madonna.

Hannah Brown- 25 out of 30
Hannah is fired up after a few of the knocks she got last week from the judges table. Alan designed a jazz routine to Donna Summer's "Bad Girls" and Hannah finds her inner zombie. Len and Bruno had a disagreement about whether she needs to punch things up a little more (Bruno wants it. Len said she's fine). Carrie Ann was a little more philosophical, asking Hannah to give a bit more from her heart, shake off her shyness, and promised if she "goes raw" she'll be there for her.

Karamo- 25 out of 30
The best news for Karamo was that his Paso Doble was done to the Destiny's Child song "Survivor," one of his favorites. Bruno admired the power and purpose of the dance. Carrie Ann called Karamo a sonic boom. Len agreed there was plenty of attack and intensity.

Kate Flannery- 24 out of 30
Kate's another big fan of Halloween. She grew up with seven kids in the house and that meant lots of candy for this holiday. Pasha comes up with a clever "spooky" Rumba to the Chris Isaak classic "Wicked Game." Bruno thought it was a haunting story. Len took the opportunity to praise Pasha for continually bringing traditional, authentic steps to the routines.

Sean Spicer- 18 out of 30
Sean endured four hours of extensive makeup to transform into Frankenstein for a "Monster Mash" jive. The character fit his stiffness on the dance floor. Len had the line of this Halloween-themed night, calling the routine neither super nor natural. However, all three judges complimented Sean on his spirit and for the fact he gives his all.

For the team dances, we saw Team Trick with James, Lauren, Hannah and Ally and the judges gave them an additional 27 points each. Team Treat was Sean, Karamo, Kate and Kel and they earned 24 additional points.

The results were in and Tom Bergeron and Erin Andrews read off the names of the couples who were deemed safe: Ally, Hannah, Kel, James, Lauren and Sean.