'Dancing with the Stars' Movie Night recap: Celebrities pay tribute to their favorite movies in Week 3 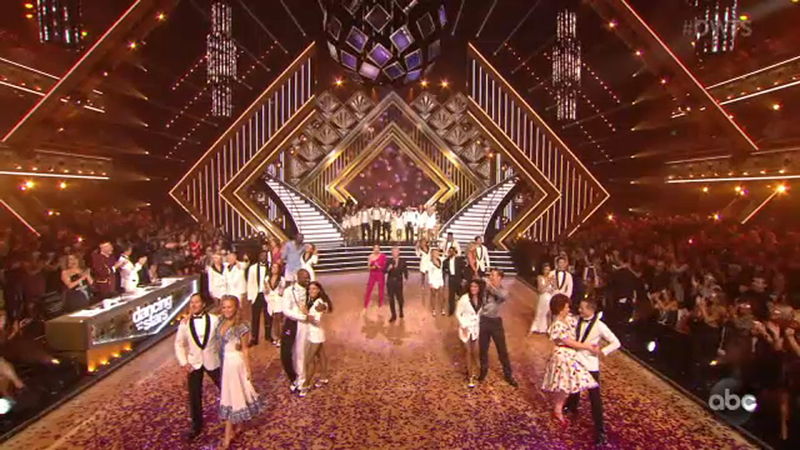 LOS ANGELES -- The big screen and the small screen collided in week three of "Dancing with the Stars" for Movie Night.

The 11 remaining couples each danced to songs inspired by the celebrity's favorite movies.

We're still getting used to the "live vote," which combines the judges' scores with America's vote. The judges have been given authority to decide which of the two stars that land in the bottom two will be eliminated.

Host Tom Bergeron drops a bomb about four minutes into the show: Ray Lewis is injured and is dropping out of the competition. We learn later on that he has three torn tendons in a foot he had previously injured during his football days, and after an MRI, the doctor said Ray needs surgery before he permanently damages something. He's upset and said he's never had to quit anything before.

Kate Flannery: 24 out of 30
Kate revealed she was literally speechless after her strong scoring last week. She put just as much effort and heart into this week's quickstep and she did it again! Pasha choreographed a fun and fast routine to the song "9 to 5" and Kate more than met the challenge. Head judge Len Goodman loved her performance, along with the technique. Carrie Ann Inaba told Kate her hard work is paying off. Bruno Tonioli said Kate was just like the movie: a big hit!

Ally Brooke: 24 out of 30
Ally's big breakthrough last week continued. It helped that this week's dance was extremely personal to her. She and Sasha did a rumba to a song by Selena. Ally said she's watched the Jennifer Lopez movie too many times to count, and Selena herself is Ally's favorite artist of all time. Her family even knows some of Selena's family in Texas. Len loved the choreography that was full of specific steps; and Bruno thought it was a perfect blend of correct technique and heart.

Sailor Brinkley-Cook: 23 out of 30
Give this girl an A+ for attitude and commitment! The model who stepped in at the last minute for her injured supermodel mom is not phoning it in. This week, she and Val were assigned the Tango and their song happened to be the title tune from her favorite movie, "Mamma Mia." Bruno thanked her for taking their critiques to heart and working at fixing things. Carrie Ann saw a real transformation and Len called it a routine full of snap, crackle and pop with clever moments and overall, well done.

James Van Der Beek : 23 out of 30
It's another rumba, and another star nailed it! James and Emma performed a slow and sultry routine to "Shallow", the Oscar-winning song from "A Star is Born." Bruno went for the puns, saying the audience was going "gaga" over James, and there was nothing "shallow" about the dance. Carrie Ann fawned over the poetry of motion and Emma's choreography.

Hannah Brown: 21 out of 30
Hannah's never going to live down any "bride" tie-ins! She gets a song from "Bridesmaids" for her rumba this week: the classic Wilson Phillips song "Hold On." All three judges appreciated her lyrical movements, especially with her upper body. But they all encouraged her to work on the lower half, especially the hips, during the Latin dances.

Lauren Alaina: 20 out of 30
Lauren and Gleb did a tango to "Pretty Woman," complete with outfit reminiscent of one of Julia Roberts' iconic costumes. Rehearsal was a bit tough, with Gleb pulling out all the stops to get her posture just right for the Tango. Who knew a brush and a roll of paper towels could be so useful in dance class? Len appreciated the drive and purpose of the dance. Bruno liked it, too, but warned her to watch her transitions because she got a little "wobbly."

Kel Mitchell: 20 out of 30
Kel and Witney channel Jack and Rose from "Titanic" and rumba to Celine Dion's "My Heart Will Go On." He needed a little extra coaching about just what a rumba was; and that included lots of extra time working on his hip movement. Carrie Ann called the dance solid, but wants to see Kel smooth things out a bit and Bruno agreed, saying he'd like to see some movements a bit softer.

Karamo: 16 out of 30
Karamo seemed to have let Len get in his head and he was hyper-focused on showing the head judge he can improve. He and Jenna did a jive to "I'm Still Standing" from Elton John and the recent hit movie "Rocketman." Karamo wanted to channel as much Elton as he could, and leave any inhibitions behind. On the plus side, Carrie Ann called the dance entertaining and Bruno saw great potential. On the down side, all the judges saw a lot of mistakes and want Karamo to re-group and come back stronger.

Sean Spicer : 15 out of 30
There's no doubt Sean Spicer is having the time of his life with DWTS. He got to have some fun this round by attempting to emulate John Travolta and the classic "Night Fever" from "Saturday Night Fever." Lindsay is trying her hardest, but his feet don't seem to keep up with his good attitude. Carrie Ann offered one bit of advice, which was to loosen up and be less robotic.

Lamar Odom: 12 out of 30
The former NBA champ knows he's still around for one reason: the fans. He's grateful to those who are voting for him and Peta. He's also grateful to his pro partner, calling Peta the "Kobe Bryant" of the ballroom. Cue Kobe, who jumps on the phone with Lamar, and tells him to practice more. The two performed a Cha (sort of) to "Old Time Rock and Roll" by Bob Seger from "Risky Business." Len said he was optimistic for a second, then the wheels fell off the bus. Carrie Ann told Lamar to listen to the audience and their reaction, and use that energy to just keep going.

We learn the bottom two for the week are Lamar and Kel. But thanks to Ray's injury and need to drop out of the competition, no one is eliminated this week!
Report a correction or typo
Related topics:
arts & entertainmentdancingtelevisiondancing with the stars
Copyright © 2022 OnTheRedCarpet.com. All Rights Reserved.
DANCING WITH THE STARS
Iman Shumpert puts sports world on notice with historic 'Dancing wi...
'Dancing with the Stars' crowns season 30 winner
'Bachelorette' co-host Kaitlyn Bristowe talks 'DWTS' tour, wedding
'Dancing With the Stars' judge Derek Hough says he has COVID-19
TOP STORIES
Officer injured in Harlem shooting transferred to NYU Langone
Man recovering after being shoved onto subway tracks
Mayor Adams faces growing challenge to make NYC streets safe
Teen shot in back of head among 3 injured in Brooklyn shooting
Family, friends remember fallen officer as kind-hearted young man
AccuWeather: Chilly with some sunshine
Deer rescued after falling through ice on Long Island
Show More
Family demands justice after 23-year-old woman found dead after date
Thousands of runners brave cold for NYRR Half-Marathon
5 tax changes that can boost your refund this year
Market drops 1,700 points, while inflation cancels out wage increases
Domestic incidents are highly dangerous for police officers: Experts
More TOP STORIES News