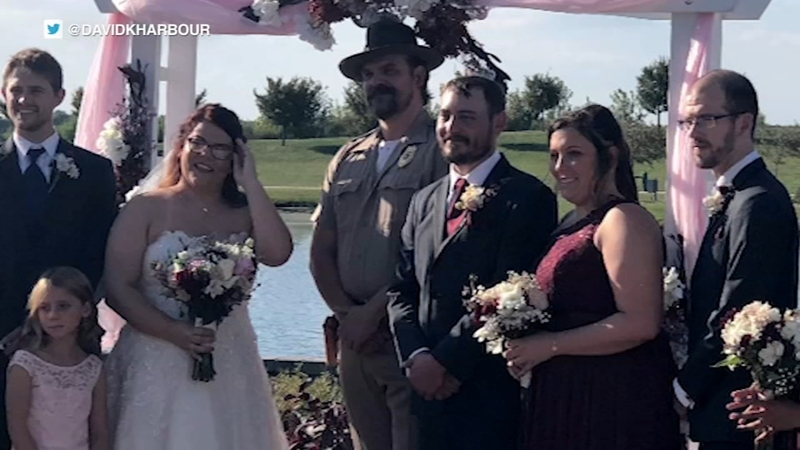 SRINGFIELD, Illnois -- "Stranger Things" star David Harbour made good on a promise to officiate a fan's wedding in Illinois this past weekend.

The actor responded to a fan's tweet in January asking what it would take to get him to officiate his wedding in September.

"125k retweets. Provided date works with s3 shooting schedule, I will get ordained and perform ceremony," Harbour replied. "I get to read an esteemed love letter of my choosing, and after the cake is officially cut, I get the very first piece."

It took less than 24 hours for the tweet to reach the required threshold, and when the wedding happened over the weekend in Springfield, Harbour was there. He even dressed as his "Stranger Things" character, police Chief Jim Hopper.

Hey internet. I know it’s been awhile. I retreated. Needed some space. You probably get it. But I’ve been thinking about ya in the interim. And all your retweets. And so me and some fun folks in Springfield, Illinois made good on our promise we made all those months ago. pic.twitter.com/fZK8zNMQSi

Harbour has issued and responded to social media challenges this year. He appeared in a high school student's senior yearbook photo after her request was retweeted 25,000 times.

.@DavidKHarbour how many retweets for you take my senior photos with me

25k. And I get to wear the school sweatshirt and hold a trombone. https://t.co/xPNEE681J4

He also took a trip to Antarctica with Greenpeace after the organization said they'd try to get him on their expedition if he got more than 200,000 retweets.

Hey @Greenpeace , how many retweets to send me someplace to tell emperor penguin couples I think they have terrific parenting ideologies? Perhaps hone the Hopper dance with the males...

Hmm, if you get over 200k we’ll ask the Captain if you can join our expedition to the Antarctic and dance with the penguins. #StrangerThings have happened https://t.co/qT78aIcKOw pic.twitter.com/LmmLceE17J

Harbour was nominated for an Emmy for Supporting Actor in a Drama Series. Season three of "Stranger Things" is filming now.