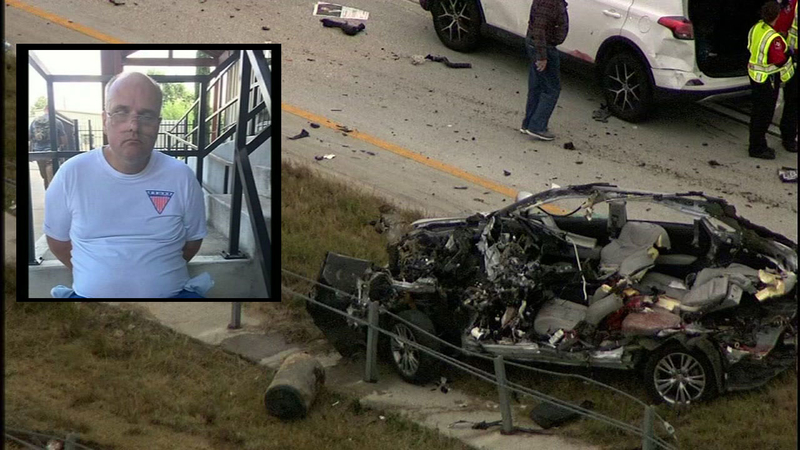 HOUSTON, Texas -- Bizarre and shocking details have been released about the man sources say caused a crash in Texas that killed two people and sent four others to the hospital.

Authorities identified the man behind the wheel of the pickup truck as 54-year-old Charles Glaze, who sources crossed from the westbound lanes of Highway 99 over the median and into oncoming traffic, striking four vehicles.

When speaking to authorities, Glaze reportedly said he didn't know what happened before the crash.

Skyeye captured video of a devastating crash on the Grand Parkway in northwest Harris County.

A Katy police officer told sister station ABC13 Eyewitness News in Houston that he was the first to arrive at the scene and helped extract a man from a rolled over Ford F-150.

"The best way I can describe it, mass chaos," Officer Johnny Alvarez said. "A huge field of debris, unfortunately,."

Officer Alvarez jumped into action when he saw the overturned truck. We later learned the truck belongs to Glaze.

"The vehicle was overturned," Alvarez said. "I got on my knees, and I entered the vehicle through the rear passenger window. We were applying first aid, and we just assisted him in any way we could."

Deputies said Glaze did not appear to be intoxicated and that he is cooperating with their investigation. Glaze has not been charged in the deadly crash.

He apparently has a history of seizures, according to the sheriff's office. It was not immediately known if Glaze was cleared by a doctor to drive.

At least one vehicle rolled over, and several others were left mangled or torn to pieces. A boat on a trailer was seen in the middle of the wreckage.

Glaze was reportedly wearing an ankle monitor at the time of the crash. but new details revealed a twist. According to sources, not only does Glaze have a medical history, but he also has a criminal history and was charged in 2017 with aggravated kidnapping and assault out of Montgomery County.

Investigators say that a woman was visiting her son's gravesite when Glaze attacked her at the Klein Memorial Cemetery in Tomball.

Deputies said he assaulted her with a Taser and showed her a gun before tying her up with zip ties and a necktie. Deputies say she managed to escape.

In another incident, deputies with the Montgomery County Sheriff's Office say a man matching Glaze's description reportedly made another woman feel uncomfortable at a different Klein cemetery. She reported that incident to authorities.