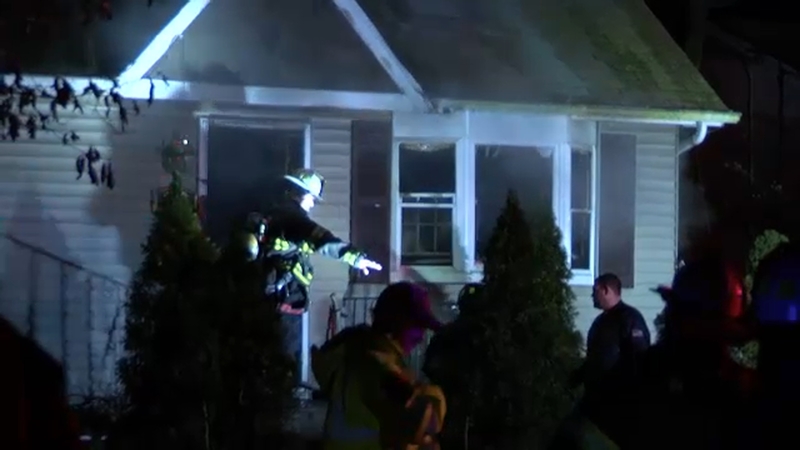 The house caught fire on Sinn Street in Patchogue just before 1:30 a.m.

Three responding Suffolk County police officers, a sergeant and two officers, were alerted to the fire by a part-time resident of the house who had arrived to pick up some of his items and noticed the fire.

They pushed their way inside and found a disoriented 47-year-old man in the basement. They pulled him to safety.

"They then attempted to enter the main part of the house from the basement," Suffolk County police Detective Lieutenant Kevin Beyrer said. "They were turned back by the flames. They went back outside, alerted the fire departments, who were then on the scene, as to what happened."

Firefighters then found the two women, identified as 54-year-old Kimberley Bonsignore and 56-year-old Brenda Richardson, inside the home. Detectives believe Bonsignore was the homeowner.

"They made entry, made the house safe, and discovered two residents in the main portion of the house," Beyrer said. "Two adult females were dead at the scene."

Late Monday morning, the man police rescued returned to the scene, barefoot and in pain.

Neighbor Gina Monteforte woke up in the middle of the night to the alarming sight of firefighters breaking windows in the home across the street. She said police have been called there a number of times before.

"Tragic, but not surprising, absolutely," she said. "There's activity at this house all the time, but I'm hoping now it's the end of it...There are children on the block, so it's just not been a safe place, and for this to happen is ultimately pretty scary."

The three officers were treated for minor injuries.

"They're amazing," Monteforte said. "Not knowing what you're walking into? Thank God they were here."

The cause of the fire is under investigation, but is not believed to be suspicious.

Authorities said there were no working smoke detectors inside the home.