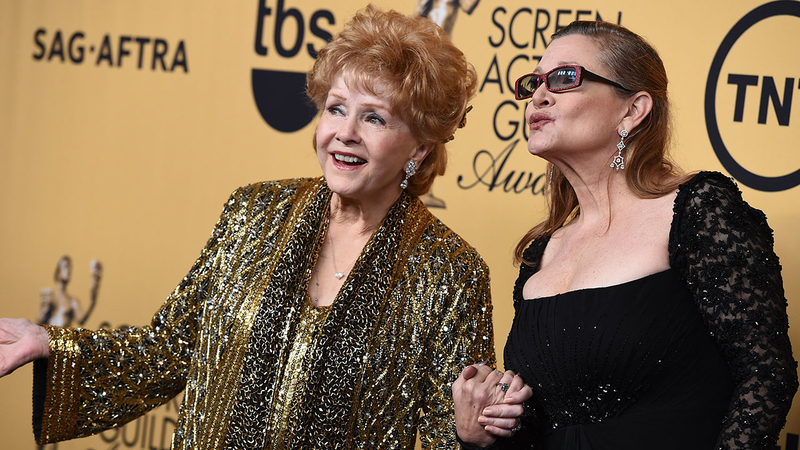 NEW YORK (WABC) -- In death as it was in life, Debbie Reynolds and her daughter, Carrie Fisher, remain linked in our minds, but each left their own legacies. The timing of their deaths so close together means we have barely finished looking back on a daughter's career when we must celebrate her mother's.

As a movie star and as a mom, one word defined Reynolds, "unsinkable."

Like the character she played in "The Unsinkable Mollie Brown," the part that earned her an Oscar nomination, Reynolds persevered in Hollywood for more than 60 years.

Her first movie, "Singin' in the Rain," was her most famous, and counted among the best musicals ever made. At just 19 years of age, Reynolds earned the title "America's sweetheart."

In the world of Hollywood drama, Reynold's personal life was a roller coaster as well. After marrying Eddie Fisher and bearing two children -- Carrie and Todd -- he left Debbie to marry her best friend, Elizabeth Taylor.

"That was an incident that happens in your life that is unhappy time," Reynolds said in an interview with Good Morning America, "and you grow up a lot. But it's just something that you have to live through."

Reynolds lived through bankruptcy and a total of three divorces, one of her husbands leaving her $3 million in debt. The star's complicated relationship with Carrie inspired her daughter's book: "Postcards from the Edge," which was then adapted into a movie starring Meryl Streep and Shirley Maclaine as characters based on both of them.

For more than a decade as Fisher struggled with substance abuse and mental illness, the mother and daughter pair were estranged.

"She didn't talk to me for probably 10 years," Reynolds said. "So that was the most difficult time of all, very very painful, very heartbreaking."

Time helped heal the wounds even as Reynolds continued to work into her 80s, breathing life into newer characters like Grandma Splendora in Disney Channel's "Halloweentown." A new HBO documentary, set to air in March 2017, reflects on their life-long relationship and will take on an even greater meaning with the unfortunate passing of both stars.

Reynold's legacy is as one of the last links to Hollywood's "Golden Age," a bridge between old and young. There is so much show business history in the career of this one woman who gave us so much for so long.

Reynolds' long-held dream to build a Hollywood museum, collecting costumes and memorabilia, perfectly showed her drive and determination. She actually opened a place to show them in Las Vegas, but it later had to close.