How to watch the third Democratic debate on ABC 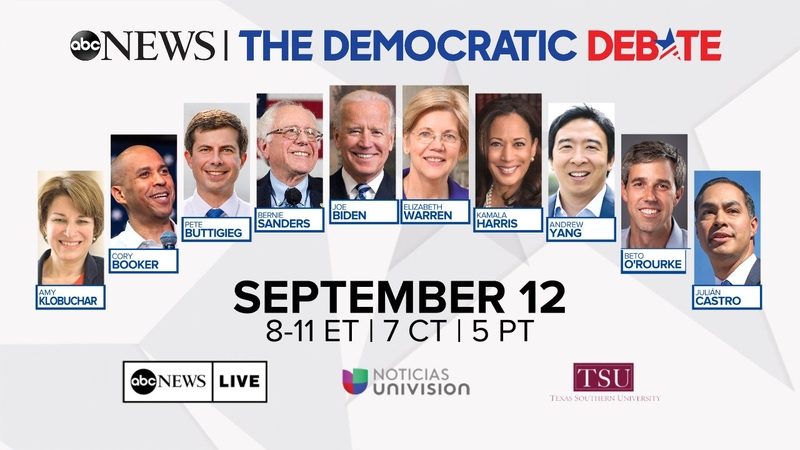 NEW YORK -- Eight months into the campaign season, the third matchup in a series of Democratic National Committee-sanctioned primary debates will feature a winnowed field. It's the smallest qualifying roster yet for a debate with 20 candidates still in the running.

The debate will be held at Texas Southern University, a public, historically black university, and will air from 8 to 11 p.m. ET on Channel 7 WABC-TV and across ABC, Univision with a Spanish translation, and on ABC News Live. The streaming channel is available on the ABCNews.com, Good Morning America and FiveThirtyEight websites and mobile phone apps, as well as Hulu Live, The Roku Channel, Facebook Watch, AppleTV, Amazon Fire TV, YouTube, Apple News, and Twitter.

In the two prior debates in Miami and Detroit earlier this summer, the current two polling front-runners never tangled on the same stage. But in this debate, Biden and Warren are set to clash for the first time as the field enters a new phase of the primary.

The ideological divide within the Democratic Party will be front and center. Biden will be up against both progressive stalwarts Warren and Sanders, who have avoided criticizing each other so far this cycle, and who even teamed up to champion their shared vision for transformative progressive reform during the July debate.

But Warren might not have an ally this time to help play defense against an expected new round of criticism. After spending the first part of the year trailing Sanders, Warren often now outpaces her liberal colleague in recent polls.

Biden, with a target on his back, is expected to have to fend off attacks from all sides with Harris, Booker, Buttigieg and Yang all armed with fresh ammunition. Klobuchar is another middle-of-the-road candidate who might take aim at a progressive agenda that touts Medicare for All and free public college tuition.

Castro and O'Rourke, both appearing in their home state, are also on the same stage again, potentially teeing up another wrangle between the two Texans.

Earlier this year, prior to the first Democratic debates, the DNC announced more stringent qualifying rules for the fall debates in September and October.

HOW TO WATCH THE DEBATE: The ABC News Democratic Debate will air live on Channel 7 WABC-TV and nationally across the ABC Television Network, Univision with a Spanish translation, and on ABC News Live. The streaming channel is available on the ABCNews.com, Good Morning America and FiveThirtyEight websites and mobile phone apps, as well as Hulu Live, The Roku Channel, Facebook Watch, AppleTV, Amazon Fire TV, YouTube, Apple News, and Twitter.