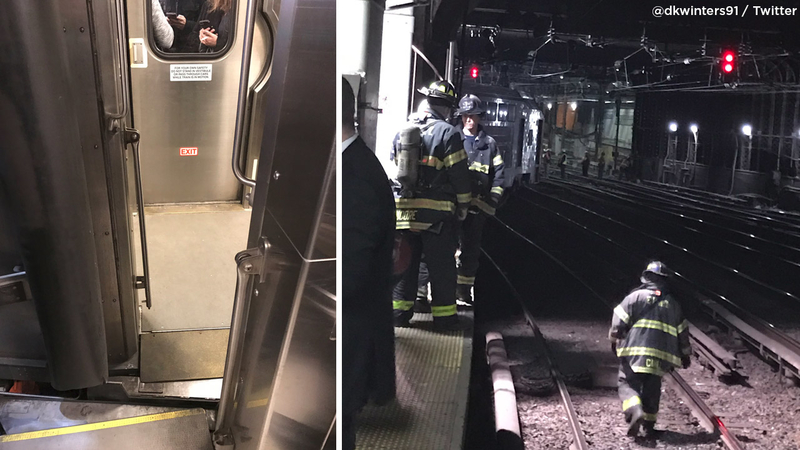 MIDTOWN, Manhattan (WABC) -- Train service was disrupted in and out of New York's Penn Station following a minor derailment Monday, and problems are expected to extend into Tuesday morning's commute.

NJ Transit Northeast Corridor Train 3926, the 7:31 from Trenton, experienced a slow speed derailment while pulling into track 9 at Penn Station at about 9 a.m.

About 1,200 passengers were on the train at the time. Five people were treated for minor injuries.

Most passengers were able to disembark the train onto the platform. However, hundreds of passengers on the rear four cars could not immediately exit their train because the cars were not in alignment. They were led to the platform by NJ Transit personnel.

Investigators from the Federal Railroad Administration are coming to Penn Station to look into the derailment.

Below are the details for the each of the transit services impacted by the derailment:

New Jersey Transit trains were significantly impacted for Monday evening's commute, and the issues will continue into Tuesday morning. The transit service issued these details for Tuesday:

* MidTOWN Direct trains will continue to operate in and out of Hoboken Terminal where customers can access PATH and NJ TRANSIT bus service. PATH will also be increasing service.

* Customers are encouraged to check njtransit.com for complete details.


** AMTRAK **
Amtrak will operate a modified schedule on the Northeast Corridor Tuesday, April 4th. Customers on trains arriving/departing New York Penn Station may experience delays up to 60 minutes during rush hours and 30 minutes or less during non-rush hours.

Due to reduced track capacity, the Northeast Regional service will operate a modified schedule with reduced frequencies between Washington, D.C. and New York, NY. To accommodate passengers during the modified schedule, Amtrak is providing some additional stops in Delaware, Pennsylvania and New Jersey on Tuesday, April 4.

There were 18 trains canceled for Monday evening's commute, but trains are now operating on or close to schedule.

As Amtrak crews continue to work around the clock to repair tracks damaged in Monday morning's derailment of an NJ TRANSIT train, the Long Island Rail Road will need to cancel 10 morning rush hour trains to Penn Station on Tuesday, terminate four other trains at Jamaica, and divert one other train to Hunterspoint Avenue, Queens.

The remaining LIRR trains to Penn Station could experience delays and crowding.

** WHY THE DELAYS AND CANCELLATIONS **

The derailment resulted in limitations on track and platform space at Penn Station as crews are expected to continue to respond to the site of the derailment and make track and infrastructure repairs.

Amtrak owns and maintains Penn Station's tracks and infrastructure. While the LIRR normally has use of nine departure tracks from Penn Station, Tracks 13 through 21, the LIRR expects to be limited to fewer tracks and platforms than normal.

The derailment comes a week and a half after an Amtrak train partially derailed as it pulled out of Penn Station.

It scraped the side of an arriving NJ Transit train on March 24. No serious injuries were reported.